As a single Black woman who has been married and divorced, but already had four children by the time I first wed … I can tell you now that “daddy in the home” is NOT the panacea some people think it is. In MY case, when I did marry their father, it only made things worse.

That doesn’t mean “homedaddy” is not a good thing, but it does mean it’s not always an option – especially with younger folks who likely aren’t thinking in the first place. And in the second place, ‘baby daddy’ probably is at home, a man or a boy that the child might also call “Granddaddy,” “Uncle,” “Brother,” or even “Cousin” if the family wasn’t embarrassed by that little tidbit of information getting out.

Only time tells. There no magic looking glass or crystal ball that says how bad people turn good and good people turn bad or how good stays good and bad stays bad. Nobody really knows how a child will turn out, two parent family or not. There are too many two-parent families with horrid children to even call it, so all beliefs are on the table.

‘DADDY IN THE HOME’ BS

I’ve listened to so much BS about how the ‘poor Black’ children are falling apart and getting in all kinds of trouble because there is no “daddy in the home,” and all of these “stupid Black women on welfare” who keep proliferating while in poverty. Then tell me a story about how there are ZERO double-parent (fully-parented) homes with troubled children in them and we’ll have that talk.

Single Black women have ALWAYS raised their children, though far too many Black women are also bad mothers married or not … and too many of the children of single Black women turned out quite well to make a judgment call on any of it. Furthermore, married Black women don’t have any more guarantees than anyone else does. 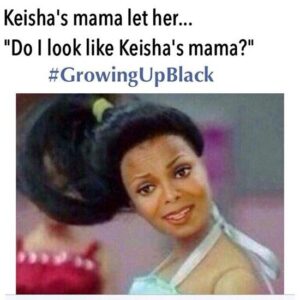 Children get grown, hopefully get gone, and make their own decisions regardless.

My own eldest granddaughter, one of the most privileged and spoiled and ‘daddy-loved’ Black females on the planet -whose father went into overdrive protecting his children because of his own daddy-abandonment issues- went bonkers right around 17 all by herself … and NONE of the sacrifices her daddy (my son) made for her made a hillabeans difference about her singular ‘I’m grown and you can’t tell me what to do’ decisions in the end.

I can’t even say that if I had had a daddy LIKE HERS, I would have turned out better. I don’t know that, and neither does anyone else.

But it is what it is. There ARE no guarantees. ZIP. None. Either way, children don’t come with a personalized manual or guidebook for how to raise them right.

It’s as if no one has the sense enough to know that Black women also fall in love and things don’t always work out as planned, and they have no intention of being left alone, but ‘ish’ happens. They may not BE Cinderella-esque, or wake up like some little ‘Snow White’ fiction creature with little bluebirds singing and whistling and chirping over their heads in the mornings, but they dream like her — about home and family and love in their lives, and it simply don’t go the way they planned. Yeah, I said “don’t” in that sentence: Slurry intentional.

It doesn’t even always go that way for WHITE women, and plenty of them end up single-parenting as well … including the mothers of Lance Armstrong, Pierce Brosnan, and Tom Cruise, whose father abused him, as well as Don Knotts — who had bona fide daddy abuse issues that wore him out to the day he died. [ withoutafather.com ]

OF COURSE, IT WOULD BE BETTER IF ‘BLACK WARD CLEAVER’ WAS SOMEWHERE NEARBY…BUT DON’T BE COLOR-CODING SINGLE PARENTS

It’s as if these single-mom-bashers have no clue that that stated 70-something percent single Black women with no daddy in the home, blah blah blah … I’d be almost willing to be MORE THAN HALF OF THEM DO HAVE DADDIES IN THE HOME … ALSO KNOWN AS — the man who also happens to be the granddaddy, or maybe the the uncle, the cousin, or even the brother of ‘baby mama’, which is probably why she done lost her ever-loving mind anyway. In-home child molestation is not only allowed, but the women of the family often help to keep it quiet and hidden and act like the little girl is ‘just crazy.’

One particular female I know told me of a story where her grandfather was a known child molester and when he tried to molest her, she was told to shush it and refused to do so. He ended up in prison because of it, and that is exactly where he belonged.

Don’t even bother pretending it doesn’t happen to white women, either — Danielle Steel wrote BOOKS about it men with big time community standing raping their own daughters and female relatives. Daddy just might BE in the home and nobody wants to talk about it … AND the daughter is getting blamed for it, at that.

Stop Bitching and Do Something

While these folks are busy yapping about it, they need to take the time out to go COVER these children before something bad does happen. If they can’t do that, then they need to shut up. Period.

It’s like telling someone to “go get a job,” and YOU ain’t hiring.

If you are not resolving the problem, then you are part of it. Period.

It isn’t like Black women don’t get beat up enough without Black men helping it along and doing nothing but yapping it up like a gay guy on a celebrity ‘news’ column who has nothing to do all day but look at Oprah’s toes and Beyonce’s ass.

Single Black women having babies is not anything new, it goes back to the BEGINNING OF TIME, or the “Book of Genesis” for those who believe. Black women are responsible for the Earth’s population, so this new Roman theology about marriage and timelines and all of that hoorah is all about European white male control theories, not about God’s timing.

“By the time you’re this age, you should have accomplished that … no.” Not really. It gets done when it gets done, period.

Mary, the Mother of Jesus, was a 14-year old Mother/Madonna without a husband at the time, and no matter how much we deny it, it’s still a fact. The denial of it changes nothing.

Sarah put Hagar and her son, Abraham’s eldest son called Ishmael, out ‘in the streets’ over a tiff between the two brothers. Ishmael and his mother, Hagar, would have died in the wilderness of dehydration and starvation. She was made a single Black mother by Sarah’s sin. But Sarah gave no care of them, even though it was she, and not Hagar, who sinned by her distrust of the Lord God who had made her a promise. But the “elder shall serve the younger,” because Isaac was the Son of the Promise and not the older son of the Bondwoman. Yet, the angel of the Lord came to them in the wilderness and said “He will be a great nation also, because he is yet and still the son of Abraham.”

#BlackMaturityMatters … especially in a nation filled with a majority of white male lawmakers who want to keep a guard over the narrative rules about how young a girl can be before they are legally allowed to molest her and not go to jail. Just because they’re nasty like that.

FILING FLINGY FEELINGS ON THE FIRST AND ORIGINAL BABY DADDIES

And don’t even START with the hundreds of white male “baby daddies” who abandoned their entire Black families from the very beginning, and left them desolate and in dire poverty coming off those plantations more than 150 years ago. Or the ones who are still disowning their Black children to this day.

There were hundreds of white men who were disowned by their own families for even claiming their Black inheritance and descendants. The ruse is real.

It doesn’t end just because someone feels a need to justify their behavior by making Black women the scapegoats for their own sexual lusts. THAT part of reparations has not been rectified to this very day, and it was the WC Bradley family of Columbus, GA who left my Black ancestors in the streets to die back in the 1800s – even after they spent more than 300 years on the plantations of Ft. Mitchell, Alabama making them rich.

No woman of any race is required to remarry, no matter what happened to her husband or former husband – even if he died. Jacqueline Kennedy-Onassis single-parented, and so did Coretta Scott King, Betty Shabazz, Myrlie Evers, and Virginia Clinton Kelley. Many children who did quite well in life were single-parented, including the much paranoid Don Knotts (‘Barney Fife’ from The Andy Griffith Show), who is said to have been severely abused by his father before his father finally left home for good.

Do or do not do – in some folks mind, Black women can’t win for losing. Surely, all of us should have had enough of other people controlling the media’s narrative about us.

Black men, this includes YOU – [ withoutafather.com ].

The Choice to Single Parent

There ARE Black women who actually choose to become single mothers because “Mr. Right” simply doesn’t exist. They don’t need to sit around whimpering about never being a Mother just because some man didn’t prove himself worthy.

If you are running your mouths and not gussying up to the table to marry and support these single Black women and their children, you are no better than a white person telling her to “get a job” when they aren’t doing the hiring.

‘Shouldn’tahad‘ is beside the point…they’re here now and there is no putting them back where they came from. Get a clue about how reproduction and child-BIRTH actually works, not the way you think it should work by white people’s Americanized timelines about something they can’t control. Then…

Put your superb ‘Papa’ skills on the table and help raise these children ‘properly’, or just shut up.

Famous people who grew up without a father or without a mother:

And that’s not the end of the list. It goes on.