There are 10 ways you can tell a Black racist…a REAL one, not one who opposes white supremacy, from Black (African) Americans: 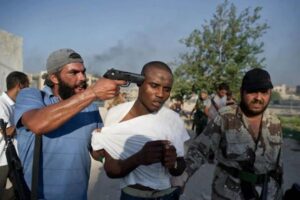 1) Anyone who doesn’t pay much close attention to Black people until a white person gives them permission to say something asinine. You can tell these Black racists by the fact that their reasoning is never logical…like Trump’s, it’s just engineered to get attention without any substance to back it. Even thinking you’re supposed to hate Democrats because white Republicans said so is Black racist as hell.

2) Any Black or Afrocentric person who didn’t know that Donald Trump is taking credit for Barack Obama’s work because they were paying more attention to the color of his skin over the content of his character for 8 years is a Black racist just like the white ones.

Anyone who auto-agrees with anything a white person says that is negative about any Black person without making them prove they are right -based on skin color ALONE- is the epitome of a Black racist. Trump has done nothing but lie, make sh*+ up and fudge numbers since he was empowered to do so … and his entire dictatorship is based on cut/copy/paste President Obama – initiatives that were already in place when he got there. The good news? President Obama learned the hard way that America is just as racist now as it was 200 years ago.

Anyone who doesn’t understand that when white people are talking about us, it is not intended to help us – but to put us down

3) Any Black or Afrocentric person who doesn’t know that the word “liberal” is just a cover-all for saying “ni&&ers” and “ni&&er-lovers” is a Black racist.

Don’t be snowballed or gaslighted into thinking there is any such thing as a ‘racist liberal’. It’s usually their other version of saying we are “reverse racists.” Their reasoning for all things is cyclical, so when they say “liberal,” they are talking to anyone Black or Afrocentric, including Black conservatives, or anyone who sides with Black people about ANYTHING. Period.

If you fall for it, #theygotyou. Even when you are a Black Republican, you are a coded ‘liberal,’ and no Black candidate will ever run for President on the Republican ticket, trust that. It’s ALL about that skin color, period.

4) Any Black or Afrocentric person who never found out that healthcare reform (dubbed ‘Obamacare‘ by racist whites) wasn’t just a free ride for welfare dependents, and still don’t realize it now is a Black racist who hates Obama (and some other Black folks) because white folks said so.

They didn’t bother to educate themselves on healthcare reform and America’s history with this issue, they just started repeating anything white people told them to say, as if they had an actual clue what it was all about from the start. #NOT

Why did what looked so gosh-awful and ‘scary’ on Barack Obama get a pass on Trump’s watch?

Is That ALL We Talk About? Really?

5) Any Black or Afrocentric person who walks into a socio-economic situation or boardroom in America and thinks that all we are focused on is welfare entitlements and criminal justice is a Black racist.

There is MUCH more to us than ‘fair sentencing’ acts, penny ante future-less benefitless dead end slave wage jobs, and being eternally subsidized by government funds.

Any Black or Afrocentric person who doesn’t understand how hard we worked to make white people feel entitled and how easily we are gaslighted into thinking we don’t deserve what we earned for them has not done their homework.

Do We Have Problems with Joe Biden NOW that we didn’t have with Donald Trump nearly three years ago?

6) Any Black person who is beatching about Joe Biden’s “racism” who is also patting Trump on the back for it and doesn’t know he has said worse things about Black people than Biden could dream up is a Black racist.

Africa Needs to Change Their Own Paradigm and Control the Narrative

7) Any Black or Afrocentric person who doesn’t realize that African nations are economically diverse and not just made up of poor and impoverished Africans living in jungles and mud-thatched huts who America thinks need “christian evangelical” missions is a Black racist.

We’re tired of the lies, and should be. They’ve told them to the world for too long and it’s time for it to end. If they won’t change the narrative to acknowledge the WHOLE truth about history, do it yourself.

8) They are all the same. Any time a Black or Afrocentric person can live their life and not show the world that what they believe is valid and indisputable, they are just about as racist as a white person preaching about ‘white jesus’ and living any kind of way while they are at it.

If Joel Osteen didn’t show his “true colors” during that debacle in Houston when he wouldn’t open his church doors for people who were stranded out in the storm and floods, anyone who still supports him is a #whitehotghettomess. It ain’t like he didn’t know the majority of those people were Black, many of whom had likely supported his church in the past.

To fall for the paganism of “white Jesus of Rome” and to be in denial about the True Son of God and His True Name, Muhammad and Buddah are about the same as white Jesus on the made-up idol scale.

Besides, white evangelicals are some of the biggest racists and most murderous mentalities in America, and they are notorious liars as well. The scriptures they teach are not in line with anything close to the truth, so they may as well be a cult full of Mormons. It is no wonder churches are bleeding members with those types of hypocrites running them.

The end result is the same no matter what they preach.

9) Any Black or Afrocentric person who supports anti-abortionists and the decriminalization of rape without understanding that their words and actions never match up once a Black child is out of the womb is a Black racist.

They talk a good game, but do you see them happy to pull out their wallets out and pay child support for all of those unwanted babies they forced on some woman who didn’t want them? Then what happens when that unwanted child grows up with the pain of knowing they were not wanted or loved by their own parents? Hurt people hurt people. #GeorgeZimmerman was an unwanted child who turned into a stalker and murderer and took the life of a young Black man whose parents DID love and want him.

The tears used by white evangelical nationalists of Trump’s kind to support the “theme” of preserving white lives for Nazi-esque intentions means #OnlyWhiteLivesMatter, and that makes any Black person who falls for it just as racist and complicit as those they follow.

They could care less about your womb babies and your born ones, and have proven it in no uncertain terms. The corporation of the “united states” has never been a Black family-friendly nation, nor will it ever be. Their prestige and profits depend on the at-‘will’ immortalized hatred of dark-skinned persons.

10) Any African of real indigenous and aboriginal African origins (not European implants born in African nations) who comes to America and thinks that the only reason SOME/MOST Black people are in poverty is because they don’t “try” hard enough is a Black racist.

Hint: Most of the time they end up finding out the hard way just how racist this nation really is, but they never seem to recognize that there is such a thing as a ‘lazy white person’ who obtains without working for it just because they ARE white.

If they’re not talking about the way they live off tax money we earn NOW, when we shouldn’t even be paying taxes all things considered, then they need to spin that narrative right back around, point their accusations at themselves, and be snugly and fitly reminded of how long Europeans who infiltrated American lands lived off our ancestors’ free labor — and this nation has never come close to making up for that.

One for the road…

Any Black Person [ ‘Nationalist’ ] Who Thinks Min. Louis Farrakhan is a Problem in America…

Yet can’t tell anyone a damned thing Farrakhan says, or does, or even why he says those things or does what he does, is a Black racist who is just yappin’ and never knowing for sure what they are yappin about.

Watch how quickly a lot of Black people will repeat what white people say about Min. Farrakhan, SIGHT UNSEEN, yet can’t tell you why they would say such a thing of him, except that it’s what some white person said about him.

The Black racist so easily embraces and uses the words “ni&&er” and even “‘coon,” white nationalist race and code words … and then claims to have an insider ‘team pass’ in the Black community and/or claims to be a bona fide member of The Soul Patrol on regular duty. #NOT

We use information collected through cookies and similar technologies to improve your experience on our site, analyze how you use it, and for marketing purposes.
Facebook: 10 Tips to Defining A True Black Racist, er ah … “Nationalist”