Understanding the Complicated History Between Haiti and the Dominican Republic

Haiti and the Dominican Republic share a common border on the Island of Hispaniola. This
Island is the most densely populated in the Caribbean and is also quite large in size. However, despite this shared geography and some very parallel and shared history, diplomatic tensions between the two countries run high. In this piece, we explore the origins of the friction, why it continues, and some ongoing efforts to resolve it. 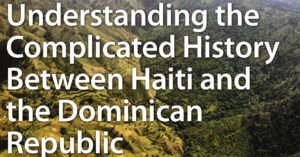 First, both two countries feel an entitlement to the Island of Hispaniola. These disagreements started during the colonial era between France and Spain in the 17th century when the colonial powers fought for dominance over the island. In 1697, the two European powers resolved the conflict by subdividing the island into what is now modern-day Haiti and the Dominican Republic. But that did little to deescalate the situation and the underlying feelings of right to the land and belonging continued. France and Spain still had a lot of unresolved issues and those issues trickled down to the island’s inhabitants where they have simmered ever since.

Towards the end of the eighteenth century, the population of the Creole speaking black African and mixed-race slaves (Indigenous, African, and French) in Haiti was growing very fast, vastly outnumbering the French colonists living there. Some of the Creole population subscribed to Vodou- a religion with origins in the western part of Africa and largely spoke French. On the other hand, the Spanish colony (present day Dominican Republic) was occupied by white European colonists and mixed-race citizens the products of Indigenous, African, and European couplings forced and unforced. They spoke Spanish and subscribed to the catholic faith and the Spanish way of life. This is the group that occupies the present Dominican Republic. These cultural and religious differences, real and perceived, have been some of the primary causes of the tensions between the two nations.

Unfortunately, even in 2019, the tensions continue to escalate between the two countries.
Currently, there are about 200,000 Dominicans who face the threat of deportation because
they are of Haitian descent. Many parents of these persons were undocumented immigrants in the Dominican Republic, but they were born there making them citizens under Dominican law. That means the Dominican government has a tough line to walk because their options are either render their legal citizens stateless or illegally deport them. To further complicate matters, there is also another group of undocumented Haitian immigrants who migrated to Dominican Republic to seek out employment.

The Dominican Republic government is believed to discriminate on the basis of color. Those
seen to have a darker skin color are put on trucks and transported by the country’s army back to Haiti. Their relatives are not even informed. A large number of Dominicans of Haitian descent have fled to Haiti. Whether they have been moving out of their own volition or out of government intimidation remains unknown.