This biography highlights the life, achievements, and other aspects of the American sports journalist Stephen A. Smith. He is famous for his remarkable skills as an actor and a radio host. Smith is also known for his role on the ESPN sports show “First Take,” where he works as a commentator.

Stephen Anthony Smith was born in October, 14th , 1967. His parents originally from the US Virgin Islands had relocated to the Bronx, New York City when Stephen was born. Smith was the fourth of six children, four of which were girls. In 1992, Smith lost his younger brother Basil to a car accident. 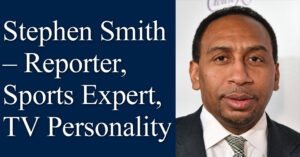 Smith attended Thomas Edison High School in Queens before entering the Fashion Institute of Technology. He was a skilled basketball player, an attribute that earned him a scholarship to study at the Winston Salem State University.

Stephen’s skills in journalism were always strong even as early as his days in college where he worked as a reporter. Smith worked with an American daily newspaper called the Winston-Salem journal, taking up the position of a clerk in the sports segment.

He started working with a morning daily newspaper called the Philadelphia Inquirer in 1994. At the Inquirer, Smith worked as an NBA columnist. Later in 2003, Smith would receive a promotion to work as the newspaper’s general sports columnist. It was in the same year that the television network ESPN contacted Smith and offered him a job. Smith worked as a commentator with the Philadelphia Inquirer for about 16 years. In 2010, Smith decided to resume his role as the newspaper’s columnist.

Smith is more inclined towards basketball reporting and analysis. At ESPN, he focuses on the analysis of the NBA countdown which back then was called the NBA Shootaround pregame show.

In 2014, Stephen launched “The Stephen A. Smith Show” which was broadcasted on a daily basis. At first, the show aired in Los Angeles and New York City. By January 2018, it would expand to being broadcast on a nationwide scale. Smith has also worked with Fox Radio Sports on one of its morning shows.

Smith became a household name from the attention he garnered through his role as one of the hosts of the ‘First Take’ show’, which he has hosted since 2012. Smith started off the show debating with the television personality Skip Bayless who left in 2016. Since then Smith has been holding the debates with Max Kellerman, a boxing commentator and sports television personality.

As an actor, Stephen made appearances in ABC’s soap opera General Hospital where he plays the role of a reporter. He also appeared in ‘I Think I Love My Wife’, a movie by comedian Chris Rock.