From Son of Slaves to the Father of Black Nationalism: Do You Know Martin Delany?

Martin Delany was a Civil Rights activist, author, editor, and doctor who came into this world on May 6, 1812. Born in Charles Town, West Virginia, as the son of slaves, his grandfather on his father’s side was a village chieftain while his grandfather on his mother’s side was known as a Mandingo prince. Delany’s mother, Pati, won her freedom and started working as a seamstress. She became determined to educate her five children. However, someone turned her in for teaching her children how to read and write, so the family moved and settled in Chambersburg, Pennsylvania. Delany’s father, Samuel, joined them a year later after he paid for his freedom.

At the age of 19, Delany decided to continue his education and walked to Jefferson College and the Bethel Church school for blacks. While there, he studied several courses, such as Latin, the Classics, and Greek. He also became an apprentice under abolitionist doctors. Delany and three other students applied and received acceptance at Harvard Medical School. However, the students were asked to leave when white students protested their admittance. Not too long after this, Delany opened his medical practice. In 1843, Delany started writing and editing for The Mystery; an African American owned newspaper where he wrote on public issues. Around this time, Delany married Catherine A. Richard. Together, the couple would go on to have eleven children with seven surviving to adulthood. Like Delany’s mother, the couple made education an important part of their children’s lives.

During 1847, Delany met William Lloyd Garrison and Frederick Douglass while they were in Pittsburg on an anti-slavery campaign. After this, Douglass and Delany established the North Star, where they allowed African Americans to tell their own stories. While Douglass stayed in Rochester, New York, handling the publications editing and printing, Delany traveled with issues to spread the stories and give lectures. In the 1850s, Delany published The Condition, Elevation, Emigration, and Destiny of the Colored People of the United States, Politically Considered, where Delany wrote about how blacks would not be considered equals, even by white abolitionists, so they must all travel back to Africa. He led the first group of African American to Africa in 1859. They settled near the Niger River.
When the Civil War erupted in 1861, Delany traveled back to the United States, where he recruited thousands of African Americans to join the Union Army. During the beginning of 1865, Delany received rank as Major for the new 52nd U.S. Colored Troops Regiment after his meeting with President Abraham Lincoln. This move gave Delany the title of becoming the first line officer in United States Army history. 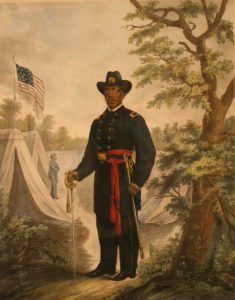 After the Civil War ended, Delany went to South Carolina, where he worked with the Freedman’s Bureau. He not only called for land for African Americans but also the enforcement of Civil Rights and black pride. He became active in the Republican Party where he lost his chance at becoming Lieutenant Governor of South Carolina but served as a Charleston, South Carolina judge. In 1879, he published The Principia of Ethnology, which discussed racial pride and purity. He also continued to tell African Americans that they would only receive true equality if they emigrated to Africa. By the time of his death on January 12, 1885, Delany was considered by many to be the father of black nationalism.