What is Sigma Gamma Rho

Sigma Gamma Rho was established by seven school teachers at Butler University in Indianapolis, IN on November 12, 1922. The group’s Alpha (first) chapter on December 30, 1929 received a charter to become a national collegiate sorority. This meant that Sigma Gamma Rho became a full-fledged sorority, free to run its activities independently on a nationwide scale. The organization dedicates its efforts towards uplifting the quality of life in various communities.

Sigma Gamma Rho Sorority advocates for better living conditions for women and pushes for social and civil actions to support them. It has been providing women and their families with support through community service that helps them lead more comfortable lives. The organization also promotes proper leadership and education for youth. Sigma Gamma Rho eliminates inequalities and barriers like racism and gender bias to help people develop reach their full potential. 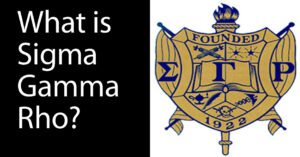 The sorority has in the past given support to several human rights legislations and supported the empowerment of grassroots citizens. The sorority has also dedicated its efforts and resources to sponsoring various national and international programs to support  underserved communities.

AIDS prevalence has been an issue of great concern and the organization has been helping curb its spread. To assist the hardest hit populations, it developed the Act against AIDS Leadership Initiative (AAALI). The initiative involves bringing together several organizations to push toward the eradication of AIDS. The initiative brings together civic, social, civil rights, media, government, education and other professional organizations.

The organization has undergraduate and alumnae chapters in the United States, Korea, Canada, The Bahamas, and Bermuda.

It operates under strict policies requiring interested women to pursue registration through its undergraduate chapters or the alumnae chapters.

Vanessa Bell Armstrong – A gospel singer widely known for her 1983 Peace Be Still album. She was one of the artists that participated in the 1st Annual Soul Train Awards ceremony.