Okay, most Black folk ‘hate’ Clarence Thomas is a strong thing to imply.

But he isn’t an “Uncle Tom.” Uncle Tom was a hero who sacrificed his life so some other slaves could escape the plantation. Too old to run himself, they killed him for refusing to tell where they were.

Clarence Thomas is more like SAMBO. Let’s just say most African Americans are repulsed by the very thought of him and his history, as well as his work as a Supreme Court Justice for the United States of America.

His last atrocious behavior is tied into his anti-affirmative action work, and Thomas has never made a secret of the fact that he hates Affirmative Action with a passion. 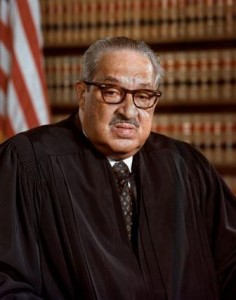 After graduation from Yale Law School (circa 1974), Thomas spurned offers to practice public interest and civil rights laws. He was quoted as saying “I went to law school to be a lawyer, not a social worker.”  Thomas has said scant little about his predecessor, Justice Thurgood Marshall, whose retirement in 1991 led to Thomas’ nomination by President George H.W. Bush. Thomas said Marshall told him “…’I had to do in my time what I had to do. You have to do in your time what you have to do.’ ” Sounds like Justice Marshall left ‘us’ an unspoken message in that one statement alone–that Black America did not have a ‘friend’ in Clarence Thomas.

The truth is that even though Thomas was admitted, through affirmative-action, to Holy Cross College, Notre Dame, Indiana, following the assassination of Dr. Martin Luther King Jr., he has done everything in his power to ‘derace’ himself, notwithstanding the blatant display of a confederate flag in his office when he was hired as Assistant Attorney General under then-Attorney General of Missouri, John Danforth.

His history in the Supreme Court, as well as his prior offerings, show that he makes no hidden matter of his personal issues with African-Americans, or his lack of a spine when it comes to matters of discrimination against minorities.

Some would say that maybe Thomas thought he was appointed to the Supremacy Court instead of the Supreme Court. His words “We can seek revenge or we can seek prosperity” are sketchy, seeing as to how his meaning of prosperity is diametrically opposed to anything beneficial to the Black community. Apparently, “we” meant his constituency-not-Black.

Amongst some of his more neurotic race-mongering actions are:

It appears that Clarence Thomas has never really figured out, in the midst of all this political posturing, who he is as a man, let alone as a Black man. He can talk the talk about the equalizing factor of individual merit, but he can’t walk the walk.

To this day and time, he still comes off in public as a very needy and highly insecure child-minded sort, having never surpassed that which he claims to be true of other persons–having never gotten over his own total dependency on proving himself ‘white enough’ in spite of the color of his skin.

Even his wife’s aunt Opal said of Thomas “I can guarantee you I was surprised when I found out . . . [Virginia] was going out with a black man. . . But he was so nice, we forgot he was black and he treated her so well, all of his other qualities made up for his being black.” To add to that, Thomas’ causes were once spearheaded and championed by some of the most notoriously racist whites with a national face in the history of civil rights, folk like Strom Thurmond, Jesse Helms, and David Duke, former grand wizard of the Knights of the Ku Klux Klan.

Speaking of his wife, Viriginia Lamp Thomas, she has been a loud supporter of conservative ‘talking heads’ such as Rush Limbaugh, Laura Ingraham, and Mark Levin, who wrote the book “Men in Black: How the Supreme Court is Destroying America.”

One can be more than reasonably certain that “Men in Black” was not with reference to the only allegedly “Black Man” on the Supreme Court. We can only suppose that one of these days, another African-American may find his or her way to SCOTUS.

America has not seen one since Thurgood Marshall retired.