Sarah Boone was born enslaved in Craven County, North Carolina in 1832, as Sarah Marshall. She married James Boone in 1847, with whom she had eight children. Shortly after the marriage, the couple were freed under unknown circumstances and moved to New Haven, Connecticut, USA. Here, Sarah Boone worked as a dressmaker, and her husband as a bricklayer. She spent most of her time making dresses for women and of course a dressmaker, she made use of the iron a lot. Therefore, it was only a matter of time before the desire for a more convenient way of carrying out ironing would come into fruition. During her work, Boone encountered the dilemma of how to flatten out creases in the sleeves and bodies of women’s dresses. Boone made her name by inventing the ironing board, or more specifically, made significant improvements to the ironing board. 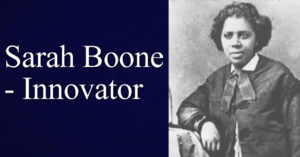 During the 19th century, a female African American inventor was very rare as it was mostly Caucasian men who were praised and acknowledged for their creations. In her patent application for her invention, it was said that the purpose was to produce a cheap, simple, convenient and highly effective device, particularly adapted to being used in ironing the sleeves and bodies of ladies’ garments. Boone’s ironing board was very narrow and curved, and this was the right size and fit of a sleeve common in ladies’ clothes during that period. It was also reversible which made it easier to iron both sides of a sleeve. This ambitious woman noted at the time that her board could also be produced flat rather than curved, which is ideal for the cut of the sleeves of men’s coats. Boone’s patent, upon adjustment, would have suggested that the ironing board could be more suited for male garments. However, it was never said that the invention was reserved just for women’s wear. What Sarah Boone was proposing was a big improvement to what most people had been using for a long time. What they usually used was a board of wood that rested across chairs and tables which was no doubt quite burdensome. Before Sarah Boone’s invention, ironing was accomplished with irons heated on the stove or fire, using the table or chairs covered with a thick cloth. Her ironing board was specifically made for anyone to iron their clothes without worrying about the sleeves having creases.

Boone can be thanked as her designs stand as a hallmark for the modern iron boards of today. We take many of these inventions for granted, since it is believed that removing creases from shirt sleeves, especially business attire, is second nature. This is to prevent looking unprofessional. Boone’s invention stood out so significantly that she was issued patent number 473,653 on April 26, 1892. Receiving this patent, made Sarah Boone one of the first African American women to receive a patent for a device that can be found in many homes to this day.