Who are Robert and Sheila Johnson? First, they were husband and wife for 33 years before divorcing in 2002. Second, they were the co-founders of the Black Entertainment Television (BET) cable network. Lastly, both made history by becoming the first African American billionaires. 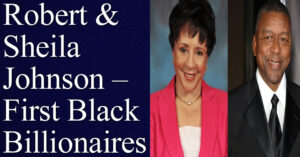 Robert L. Johnson was born in Hickory, Mississippi to Edna and Archie Johnson in 1946. His father was a farmer and his mother was a schoolteacher. After completing high school, Johnson he received his bachelor’s degree from the University of Illinois. He would later go to Princeton University where he earned a master’s degree in public affairs.

Johnson and Sheila teamed up to co-found BET, a popular cable network focusing on African American culture and music. The network was launched in January 1980. Initially, the network only broadcast for two hours on a weekly basis and later expanded over time to becoming a full-fledged 24-7 network. BET was listed in the New York Stock Exchange in 1991. It was the first African American-owned company to achieve this honor.

After 20 years, BET attracted the attention of Viacom, an American multinational mass media company, in 2000. A deal to acquire the network was closed in 2001. This transaction made Johnson an instant billionaire earning $1 billion from the sale of the network. He was the first African American billionaire in the country. Johnson continued leading BET for a number of years but later on moved to head an American asset management firm called RLJ Companies.

Sheila Crump Johnson was born on January 25, 1949 in Pennsylvania to George P. Crump and Marie Iris Crump. Her father was a neurosurgeon and her mother worked as an accountant. Sheila’s father moved the family to Maywood, Illinois where she attended Proviso High School in Chicago eventually graduating in 1966.

Sheila started off as a music teacher in a private school called Sidwell Friends in Washington D.C. In 1980, she joined forces with her husband to launch the Black Entertainment Television (BET). She worked as the executive vice president of corporate affairs at the company for many years. After several years she created the BET original program Teen Summit that focused on issues affecting teenagers.

In 1975, Sheila formed a private school youth orchestra comprised of 140 members. She pushed the group to participate in a festival in Jordan. Jordan’s King Hussein recognized her good work and gave her the top educational award in the country. She has also spent a lot of her time working as a global ambassador for CARE, a humanitarian organization fighting global poverty.

In 2001, after 3 decades of marriage and two children, the Johnson’s divorced. Despite their divorce, the two business figures remain a source of inspiration to African Americans in business and the world at large.