What is Phi Beta Sigma?

Phi Beta Sigma, a professional and collegiate fraternity, was formed by Leonard Frances Morse, Charles Ignatius Brown, and Abram Langston Taylor. The goal of the founders was to establish a Greek letter fraternity committed to promoting the ideals of brotherhood, service, and scholarship.

Phi Beta Sigma has diverse membership ranging from presidents, lawyers, athletes, civil rights activists, and doctors. The presidents that belong to the organization include Kwame Nkrumah of Ghana, Benjamin Nnamdi Azikwe of Nigeria, and William V.S Tubman of Liberia. Despite the organization being a predominantly African-American fraternity, it still accommodates members of all other cultural and ethnic backgrounds. 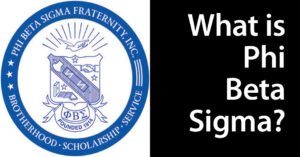 Phi Beta Sigma has come this far because it adheres to a set of progressive principles. It operates using a constitution that allows room for expansion. According to the organization’s constitution, any male students that meet the academic requirements are eligible to join. Phi Beta Sigma doesn’t discriminate on the basis of national origin, religion, or race.

To join the organization at a collegiate level, a prospective college-aged student must be enrolled in a university or college that has an associated chapter. For a professional man, he can join through an alumni chapter and must have earned a given number of credit hours or hold a college degree.

Phi Beta Sigma has notable members in different areas as shown below:

•Terrence Howard- Popular actor currently playing the role of “Luscious Lions” in the hit show Empire. Howard is an American actor and singer and began acting in major roles in 1995. Terrence acted in Mr. Holland’s Opus and Dead Presidents among other roles. He became a Sigma in 2010 in Philadelphia.

•Dr. Benjamin Franklin Chavis Jr – He was a Black-American civil rights leader who worked closely with Dr. Martin Luther King Jr as his assistant. In 1971, he became the leader of a civil rights activist group known as the Wilmington Ten.

•Ryan Howard – An accomplished businessman and major league baseball play who won awards and accolades in a sporting career. He is also the author of a children’s book series.