Nat Turner was born enslaved on October 2, 1800. He was deeply religious and knew how to read and write, a rare feat for any enslaved person at that time. He owned a bible, received messages and visions from God, and was seen frequently praying and fasting, and often preached to his fellow slaves. He ran away from his owner, Samuel Turner, but later Nat Turner received a vision and returned.

The Beginning of Nat Turner’s Revolt

Turner experienced many visions that convinced us that he was destined for a divine purpose. He later made the decision to revolt as a result of another vision which lead him to include four confidantes as his lieutenants. Turner along with Henry, Sam, Nelson, and Hark, embarked on an uprising against the slave owners in Southampton
County, VA.

A final signal (a solar eclipse) convinced Turner to begin the revolt in August of 1831. Turner was able to gather more than 70 people with whom he worked to free enslaved people and who killed white people/slave owners on sight. The force did spare the few poor white homes that were in the area.

To avoid detection by police and other governmental authorities, the force used hatchets, knives, axes, and blunt instruments. In total, the group killed approximately 60 white people before the state intervened to quell the rebellion. 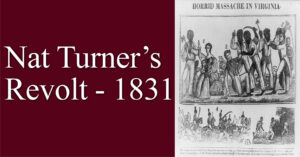 The US military was called to intervene. Three companies bearing heavy artillery were called in to stop the revolt which they did at James Parker’s farm within 24 hours of the revolt. In 12 hours, 55 people were killed in Southampton County, the deadliest slave revolt in the USA’s history.

The militias killed more than 100 African-Americans regardless of whether or not they were a part of Nat Turner’s revolt. Due to rumors surrounding the revolt, in fear of losing the status quo, whites throughout the south began killing many African-Americans without trial. They were ruthless in their retaliation and even beheaded many people
mounting their heads on poles at crossroads.

Trial of the Suspects

After the rebellion, several suspected rebels were tried in various courts across Southampton County, Sussex County, and few other counties. Most of the trials were a farce as the vast majority of those tried convicted of the crime of revolt and executed. Miraculously, Nat Turner evaded capture, for about six weeks. However, in November 1831, he was found, tried and later sentenced to death.

The Significance of Nat Turner’s Revolt

• In spite of some slave owners’ claim of compensation for their slaves being killing without trial, the legislature rejected their petitions. Captain Solon Borland condemned the killings of blacks on the basis that it dispossessed the whites of slaves.
• The Virginia legislature considered gradual emancipation, but the pro-slavery members prevailed and passed legislation to further suppress African-Americans and their rights. Southern slave states passed similar laws.
• The restrictive laws led to political currents that resulted in bloodier repercussions thirty years later.
• Some free blacks moved to the north to gain access to education and greater opportunity for their children.
• The confessions for Nat Turner are some of the most important informational sources of the history of enslavement in the USA.
• Nat Turner’s revolt shaped the USA’s cultural landscape. During President Abraham Lincoln’s address in the Cooper’s Union Address, he pointed out the revolt, calling it the Southampton Insurrection; he termed it a “threat”.
• The revolt led to some artists’ work based on the events; for example, Nate Parker’s movie, Birth of a Nation, Herbert Aptheker’s book, American Negro Slave Revolt (1943), which denounced slavery and depicted its negative impact on African-Americans.