So everyone was scammed by a woman who claimed her son, Keaton Jones, was being bullied at school. The donations began to pour in as our hearts filled with sympathy for Jones.

When MMA fighter Joe Schilling invited Keaton and his mother, Kimberly Jones, to an all expense paid trip to introduce him to some fighters and she responded by asking him to share her go fund me account on his page. When he asked what it for it very disappointed by her response:

Then to make matters worse she sent him a message saying how whites are suppose to stick together to protector each other from “predators.” This comment did nothing but infuriate Schilling. When she realized her mistake, she asked him to delete the message but instead he shared her comments with us: 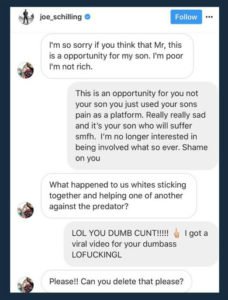 This message simply affirms suspicions of her being a racist. On her Facebook page, which has recently been made private, you could find pictures of confederate flags accompanied by anti Kaepernick rhetoric.

It is also rumored that he wasn’t “bullied” but was actually confronted after calling some black students niggers. Apparently someone in his life lead him to believe that calling black people niggers is acceptable. How can you spew hate then turn around and tell your child it’s not okay for people to be mean to him? Of course I’m not defending bullying but I’m sure we’ve heard the phrase, “Treat others how you want to be treated.”

His go fund me page has been placed on hold because a lot of people are not happy with the new information that has come to light.

Although we don’t know if he was ever bullied we do know that Kimberly doesn’t like black people so I can only assume she doesn’t like black money either. So maybe all those black athletes and entertainers who donated money should get their money back.