Miriam Benjamin was an African American schoolteacher and inventor born in Charleston, South Carolina in 1861. Her parents were Francis Benjamin (a Jewish man) and Eliza Benjamin (an African American woman); she was also the eldest of six siblings. Her siblings were, Eva S. Benjamin, Charlton D. “Lottie”, Walter W. Sampson, Lyde Wilson, and Edgar Pinkerton. Later, her parents moved to Boston, Massachusetts because her mother wanted better schooling and career opportunities for her children. 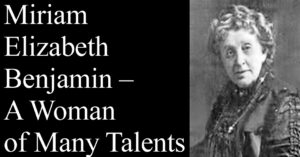 She successfully completed elementary school in South Carolina, and attended high school in Boston, Massachusetts. She later enrolled in Howard University’s Medical School but discontinued the course and studied law instead also at Howard.

She became a schoolteacher in the Washington D.C. public school system. She would return to Howard University once again for specialized coursework to prepare her to pass a civil service examination to pursue various clerical jobs in various federal departments. She graduated and started her career as a solicitor of patents. In 1920, she went to work for her brother, Edgar Benjamin, then a prominent attorney in Boston with his own practice.

While still a schoolteacher, Miriam Benjamin observed there were many customers who needed services in the hospitality industry, however guests were unable to receive these services due to limited staff numbers. Benjamin saw a need for a notification system to ease the process and invented a Gong and Signal Chair for hotels to address
the need.

The invention would become useful in notifying pages of services required by a specific guest. When a guest would press a button on the chair indicating a service request, this would send a signal to an attendant who would be able to identify the guest and their request. This system helped address the reduced numbers of hotel workers and met guest service demands. She patented her invention on July 17, 1888 – the second African American woman to receive an invention patent. Her patent number was 386, 289.

Later, her technology was modified for use on airplanes and was adopted by the United States House of Representatives. Benjamin’s invention was a precursor to airplanes’ signaling system used when passengers want to notify flight attendants for assistance. Her invention was also aimed at many other industries including health care, theatres, and government agencies. It was featured in various newspapers within the country. She also invented a medication delivery system that was supposed to be inserted through a shoe’s sole. She patented it in 1917 (U.S. Patent Number 1249, 000).

According to music historians, Miriam Benjamin may have also been a composer using the pseudonym E.B. Miriam. She may have composed more than two prominent marches including: The Boston Elite Two Step and The American Bugle Call, with the latter used in 1904 as a Presidential Campaign song of Theodore Roosevelt.

Apart from Miriam Benjamin, her two brothers were inventors, too. Edgar Benjamin invented a Trouser-shield or bicycle clip. Her other brother, Lyde W. Benjamin, was also a Boston attorney and patented an improved Broom Moisteners and Bridle.

Miriam Benjamin lived with her mother in Boston. She never married, and she didn’t have any children. She died in 1947.