To The Memory of John Singleton

To a man who single-handedly took on racial stereotypes waged against all Black “boyz in the ‘hood,” structured an idea about what it means to kill one another and to ‘man up’ and become a REAL Black man in America (“Baby Boy”), who gave the world a glance at what it looks like to have some poetic justice in the world, who took us to a place of Higher Learning where we learned that racism is just as bad for white folks as it is for Black folks, and who also laid some pretty thick and heavy groundwork for what Black films and media images should look like in the future and many years to come. 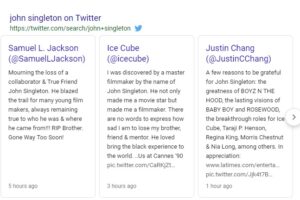 John Daniel Singleton was an American film director, screenwriter, and producer best known for directing “Boyz n the Hood“, for which he was nominated for the Academy Award for Best Director, becoming, at age 24, the first African American and youngest person to have ever been nominated for that award. [Wikipedia]