Marjorie Joyner was an African American born in 1896. She hailed from Monterey, Virginia where her parents, George Stewart and Annie Stewart, lived before moving to Dayton, Ohio, soon afterward. However, her parents divorced later, and this resulted in the frequent interruption of her education. She married Robert S. Joyner (a podiatrist) in 1916. 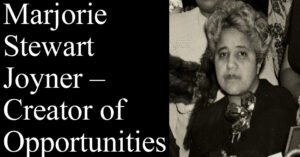 Joyner attended Englewood High School and received a high school diploma in 1935. However, earlier in 1924, she earned a music-school certificate from the Chicago Musical College. She also studied at A.B. Molar Beauty School, Chicago and graduated in 1916 – the first African American to attain such a feat. Much later in her life, she studied at Bethune-Cookman College and graduated with a bachelor’s degree in psychology in 1973 at the age of 77.

Marjorie Joyner opened a salon on Chicago’ South State Street and met Madam C. J. Walker who owned a cosmetic empire. Madame Walker was a prominent African American businesswoman who owned and operated over 200 beauty schools; Marjorie Joyner worked for her as a national supervisor. Joyner also learned hair techniques from Madame Walker. In her career, she trained and prepared approximately 15000 hair stylists. She had a successful career working in the Walker Company and later joined the board of directors.

She invented the permanent wave machine that can add curl to straight hair or straighten curly hair. She patented it in 1928. A year later, she received a patent for a scalp protector that was useful when using the device. However, the rights to her inventions went to Madame Walker and she never benefitted from them. She developed other products such as “Satin Trees” the predecessor for hair relaxer.

Her familiarity with democratic U.S. presidents such as Jimmy Carter and Franklin Roosevelt helped her in charting the political engagement course for African American affairs. For example, her friendship with First Lady Eleanor Roosevelt boosted her efforts in combating racism and the founding of the National Council of Negro Women. In the 1940s, Marjorie Joyner advised several New Deal agencies reaching out to black women because of her advisory role to the Democratic National Committee. Her other notable works include the cosmetology laws that she helped write for the state of Illinois.

• She participated in community development and helped fundraise for various schools as the leader of the Chicago Defender Charity network.
• She fundraised a lot of money for Bethune-Cookman College in Florida to create greater opportunities for African Americans to study there.
• In 1945, she co-founded the United Beauty School Owners and Teachers’ Association.
• She was a Christian and attended African Methodist Episcopal churches then co-founded the Cosmopolitan Community Church in the early 1930s.
• In 1954, she organized an educational trip to Paris for the benefit of 195 black cosmetologists.

Marjorie Joyner had various awards including:

• An honorary degree (Doctor of Humanities) from Bethune-Cookman College in 1961.
• In 1990, she was included among the Five Outstanding Achievers by the National Council of Negro Women.
• In Chicago, her birthday was named Dr. Marjorie Stewart Joyner Day in 1990.
• In the Smithsonian Institution, in Washington, D.C. and many other museums, she is the subject of exhibitions.