Sarah Breedlove, known as Madam C. J. Walker, was one of the first African Americans to become extremely wealthy in the United States. Walker suffered a scalp ailment that led to hair loss. She started experimenting with a wide range of products to prevent further hair loss and to re-grow her lost hair. In 1905, she launched a line of hair products and started marketing them to African American women. Her business quickly blossomed, and she found a place on the list of the earliest American self-made female millionaires. 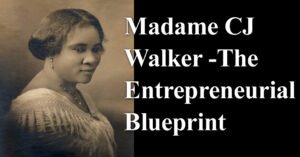 Walker’s parents passed away when she was only 7 years old, making her vulnerable to a “cruel” brother-in-law Jesse Powell. To escape this early life, she married Moses McWilliams at 14, only to be widowed at the age of 20. The death of Walker’s husband meant she had to fend for their daughter A’Lelia Walker on her own. Walker relocated to join her elder brothers who were barbers in St. Louis, Missouri. While in St. Louis, she worked as a washerwoman for over a decade and was paid “peanuts”.

Walker found life unbearable in St. Louis, since she and her daughter had to survive on the extremely underpaid money she earned as a laundress. During this era, it was common for black women to suffer severe dandruff and a wide range of scalp ailments. Walker shared the same fate in terms of suffering from dandruff, skin ailments, and baldness caused by infrequent bathing, illnesses, and poor diet. Walker decided to more closely observe her barber brothers to learn about hair care.

Walker’s life turned around at the Louisiana Purchase Exposition – an international expo held from April 30 to December 1, 1904 in St. Louis. At that time, Walker was employed by an African American hair- care entrepreneur and millionaire Annie Malone as a commission agent. It was in working with this entrepreneur where she gained the knowledge to develop her own skin and hair product line. Walker’s business expanded and soon she would rival Malone in business.

At some point, Malone accused Walker of stealing her business formula. Both of them used sulfur and petroleum jelly to manufacture their products, a formula that had been in existence for over a hundred years.

In1 906, she was married to Charles Walker eventually becoming Madam C. J. Walker and they co- operated the business. She kept marketing herself as a retailer of cosmetic creams and as an independent hairdresser. Walker would later own the Madame C. J. Walker Manufacturing Company.

She trained nearly 20,000 women to work as sales agents for her products thus creating job opportunities for them. Walker’s hair pomade and other products became popular in the United States and even in Cuba and other places around the globe.

In 1912, she attended the National Negro Business League (NNBL)-an American organization launched by Booker T. Washington in 1900. She spoke elaborately and often about female empowerment and women in business.

Walker struggled with kidney failure and complications of hypertension before her death in May 25, 1919 at the age of 51. Her final resting place is in Woodlawn Cemetery in the Bronx, NY.