Born in Depew, New York, on June 27, 1936, Lucille Clifton was a prolific and widely
respected poet. She has several accolades under her belt as she is a Pulitzer Prize nominee
and the recipient of the University of Massachusetts Press Juniper Prize among other honors.Clifton did not become a writer until 1971, while at Coppin State College in Maryland where she wrote two of her first collections, namely: Good News About the Earth (1972) and An Ordinary Woman (1974). Before she decided to make the life-changing decision to become a world-renowned writer, she worked for the state and held a position in the federal government.

Clifton heavily focuses on African-American culture and family values. Her work also displays the strength and endurance of African-Americans as a people. Clifton evokes emotions only a few poets can achieve. Her works are very humane and relatable, which are the exact words used to describe her pieces when she received the Ruth Lilly Poetry Prize in 2007. Her writing is said to be one of a kind as she is not the type to fill a book with many words. Rather, she uses relatively few lines and her poems notably lack punctuation, as she views punctuation as unnecessary. As a result, the spaces between the lines say just as much and are just as full of meaning as the words. 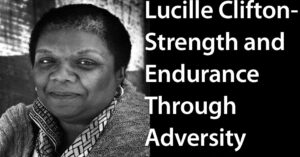 Lucille Clifton wrote many poems during the 1960s and 70s when racial segregation was
prominent in the US. In 1972, she wrote; ‘Good News about the Earth: New Poems’ which spoke heavily about the political and social uproar of the era. She often paid homage to the black leaders during those times as it was a turning point in American history. At the time, the black community was standing up for their rights with people such as Malcolm X and Martin Luther King Jr being at the forefront. This period in history was not something to blow past which is why Clifton wrote poems primarily dedicated to that time.

As an author for children, Clifton’s books for children were created to educate them primarily on black heritage while helping them understand the world today. An example of her work directed at the children is “All Us Come Cross the Water”. Connecting Clifton’s work as a children’s author to her poetry, Jocelyn K. Moody in the Oxford Companion to African- American Literature wrote, &quot;Like her poetry, Clifton’;s short fiction extols the human capacity for love, rejuvenation, and transcendence over weakness and malevolence even as it exposes the myth of the American dream.”

Lucille Clifton will forever be remembered as a woman who always tried to relate to Africa.
She regarded Africa as her home, and this was how she saw that she would forever remain
human; being able to be proud of her heritage so that she could educate others on the
importance of black history. Lucille Clifton passed away on February 13, 2010, after
prolonged complications with cancer.