Lloyd Augustus Hall was an African American chemist and inventor, who contributed to the science of food preservation. He created an innovative method of preserving meat known as “flash drying”. Hall was born in 1894 in Elgin, Illinois and was raised in the Christian belief system as his father was a minister and his grandfather was a black preacher. After attending high school in Aurora, Illinois, Hall had never been one to shy away from academic achievements, he attained his Bachelor of Science degree from Northwestern University in 1914; a Master of Science from Northwestern in 1916; and a Doctor of Science from Virginia State College in 1944. At the Department of Health Laboratories for the city of Chicago, Hall worked as junior and senior Sanitary Chemist from the 1915 to 1919. He also served as chief chemist (1919-1921) for John Morrell and Company of Ottumwa, IL. From 1921 to 1924, Hall served as president of the Chemical Products Corporation in Chicago. 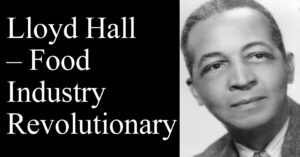 Hall’s research with preservatives has pioneered how modern society views chemicals which can be used as preservatives for meats. Food preservatives were never something that was “certain” because it was never properly researched until Hall remedied this. Hall is responsible for the variety of preservatives that can be used such as seasonings, emulsions, bakery products, antioxidants, protein hydrolysates, and other substances that keep our food fresh and flavourful. The meatpacking industry was changed for the better when he introduced his flash dried salt crystals. This method combined the preservative effect of sodium chloride with the curative action of sodium nitrate and sodium nitrite. This combination revolutionized the food preservation methods because previous earlier preservatives were unable to prevent mold and food spoilage.

Hall also developed new sterilization techniques for spices and pharmaceuticals that continue to be used today. His inventions were ground-breaking and have yet to be outdone. The area of antioxidants use in food was also explored by Hall when he discovered that foods with fats and oils spoiled when certain ingredients reacted with oxygen in the air. This urged him to test out various chemicals such as lecithin as an antioxidant so that it can better protect foods. His experiments helped preservatives to become what they are now, and his efforts pushed large-scale manufacturing of meat preservation, more specifically, the process of protein hydrolysis.

Before Hall’s extensive research on food preservation and sterilization, people simply believed that spices preserved food. However, it was found that most spices, like cloves, ginger, and pork powder, held large amounts of dangerous molds, yeast, and bacteria which promoted food poisoning. Hall found ethylene oxide gas, a well-known insecticide that was effective in destroying food-borne microbes or simply put, microorganisms such as bacteria. He found a way to remove mixtures and gases by placing the food in a vacuum and then adding ethylene oxide gas into a vacuum chamber.

Lloyd Hall performed most of his research at Griffith’s Laboratories in Chicago and his exceptional work garnered him over 100 patents. He passed away in 1971.