Did You Know that “Negro History Week” was the Root of “Black History Month”?

The month of February is considered “Black History Month” across the United States. But it had a much earlier predecessor called “Negro History Week”. This recognition was the brainchild of an African-American historian, Dr. Carter G. Woodson.  He is considered by many to be the “Father of Black History.”

Carter Godwin Woodson was born on December 19, 1875 in New Canton, VA. He was the fourth of seven children.

As a young child growing up, he worked as a sharecropper and miner to help his family. He was only able to attend high school late into his teenage years but it was discovered that he possessed a tremendous intellect which allowed him to finish high school in just two years.

Woodson attended Berea College in Kentucky. He then worked for a time for the U.S. government and traveled overseas. He later returned to the U.S. to earn his bachelors and masters degrees from the University of Chicago, and finally a PhD from Harvard in 1912. He was only the second African American to earn a PhD after W.E.B. Dubois.

Besides founding organizations that promoted the intellectual study of African-American history, Woodson himself wrote several books including his most seminal work, Mis-Education of the Negro (1933). 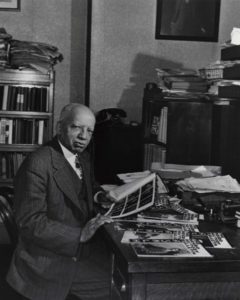 However, it was his call in February 1926 for the wide recognition of the first Negro History Week which laid the foundation for the eventual recognition of Black History Month. Woodson chose February because it was the birth month of Abraham Lincoln (February 12) and Frederick Douglass (believed to be on February 14). The word spread quickly and institutions across the nation and the ASNLH struggled to supply course materials.

Woodson would not live to see the culmination of his work into national recognition when he passed away on April 3, 1950 in Washington, DC.

It wasn’t until the 1960s and the rise of the civil rights movement that interest in promoting African American history across college campuses regained momentum.

Finally in 1976, Negro History Week made the transition to Black History Month. Since then, every U.S. president has made a proclamation honoring the month. All of this can be contributed to the work of one man – Dr. Carter G. Woodson.