There are many scholars who would say that the “father of medicine” would probably be the ancient Greek physician, Hippocrates, who was born in 460 B.C. He has been credited with making medicine into a rational science rather than one based on magic or superstition, as well as the famous Hippocratic Oath.

However, new scholarship seems to trace back the roots of modern medicine to an even earlier time and person, to the ancient Egyptian Imhotep.

The evidence of his contributions has come from previous archaeological explorations that have uncovered his role in the ancient Egyptian society. It was during the time of King Zoser (2667 to 2648 BCE) that the name of Imhotep first came to light.

His name was inscribed on the famous Step Pyramid at Saqqara. His name roughly translated into “the one that comes in peace.” His intellect and talents were apparently quite remarkable. He was a physician, architect, and an engineer. This combination of expertise compare favorably to a more modern renaissance scholar, Leonardo da Vinci.

Imhotep was a member of the court of King Zoser. He was his chief physician. 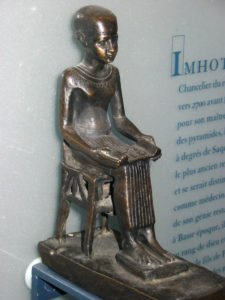 According to an ancient script (known as the Edwin Smith Papyrus c. 16th century BCE), he was named as the “founder of Egyptian medicine.” The ancient script also “covers the treatment of over 200 diseases, including 15 diseases of the abdomen, 11 of the bladder, 10 of the rectum, 29 of the eyes and 18 of the skin, hair, nails and tongue.” The document also describes early versions of modern procedures such as cautery and hemostasis.

The legacy of Imhotep lasted well beyond his death as the legend of his works apparently reached an almost cult status in ancient Egypt.

Together with another famous architect, Amenhotep, he was considered a god of healing. The worship of Imhotep as a deity would last for another thousand years.

Hippocrates (2015). Retrieved on November 16, 2017 from http://www.greekmedicine.net/whos_who/Hippocrates.html

2 thoughts on “Did You Know That Imhotep is the Real Father of Medicine?”