The second successful revolution which led to independence of a country from a foreign power in the Americas occurred in Haiti.

In 1791, a rebellion started by African-descended slaves engulfed the island nation focused mainly against the sugar plantation owners and the French government. This bloody conflict would not end until 1803 when the last of the French armies was defeated. France would eventually recognize the new nation in 1825 but it took the United States almost four decades to give their recognition to the independent nation.

By the 1700s, the French had built a large sugar and coffee based empire on the island of Saint Domingue (Haiti’s former name). To be able to cultivate the large crops produced on the island, slaves from Africa were imported in large numbers to work the fields.

The social structure of the island was based on race. At the top were the white plantation owners, followed by the white artisans and shopkeepers (also known as petit blancs), then the mixed-race population (or mulattoes), and finally the slaves. Each group had their own interests and needs which created a melting pot of tension.

The recent French Revolution helped to trigger a movement for rebellion in the island colony. One of the primary leaders was a former slave, Toussaint l’Overture. Under his leadership, the rebellion achieved great success against first the plantation owners, and then the follow on French and British forces. The United States government at this time dominated by slave owners, sided with the white plantation owners. 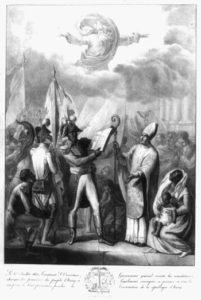 President Thomas Jefferson “pursued a policy to isolate Haiti, fearing that the

Haitian revolution would spread to the United States.” This fear would continue well into the 19th century.

It wasn’t until the U.S. Civil War broke out to decide the question of slavery in America that President Abraham Lincoln made the bold step to finally recognize Haiti in 1862.

In a New York Times article of that same year concerning the bill that would finally recognize the countries of Haiti and Liberia, the following was written:

The slave-lords ruled in our legislative halls, and dictated our National policy — foreign as well as domestic; and it was fated that the race which plays so tragic a part in our own history, should be everywhere wronged and despised by the American Republic. Happily, that horrible incubus is lifted off the nation.

1 thought on “Did You Know that Haiti Wasn’t Recognized as a Nation by the United States until 1862?”