Today’s Tuskegee University in Alabama was first known as the Tuskegee Normal and Industrial Institute. It was created by the will of a former slave and by money provided by the Alabama legislature. But it was the guiding influence and management by Booker T. Washington that made the institute a lasting success.

Booker Talliaferro Washington was born as a slave on April 5, 1856 on a plantation in Franklin County, VA. His mother, Jane, was a cook for the plantation owner. It was suspected that his father was a white man from a nearby plantation.

Washington’s early life as a slave was hard, as it was for many in similar situations. But it was around this time that he began to show an interest in education when he noticed children attending a nearby schoolhouse.

At the end of the Civil War in 1865, Jane moved the entire family to Malden, WV, and there married a freedman named Washington Ferguson.

The family was very poor though and young Booker T. Washington had to work. But Jane seemed to notice her son’s interest in education and managed to provide him a book in which he learned the alphabet.

In the following year, young Washington’s work situation improved slightly when he was employed as a houseboy. There, the mistress of the house took an interest in him and allowed Washington to attend school during the winter.

In 1872 when Washington was sixteen, he made a supreme effort to continue his education by traveling, on foot, from his home to Hampton Normal Agricultural Institute in Virginia. He was penniless but was admitted and given a job as a janitor to pay for room and board.

At Hampton, Washington was greatly influenced by the school’s founder and headmaster, Gen. Samuel C. Armstrong. Armstrong had commanded black troops during the Civil War and had worked for the Freedmen’s Bureau. With the help of the American Missionary Association, he founded the school in Hampton in 1868.

Booker T. Washington graduated in 1875. He returned to his hometown to teach and then attended the Wayland Seminary in Washington, DC. He was asked to return to Hampton in 1879 to teach there. But it was an event in 1881 that would change his life and the course of the lives of many African-Americans.

In 1880, a former slave named Lewis Adams, made a deal with the Alabama legislature to provide funds for a school at Tuskegee in return for bringing black voters into the 1880 election. 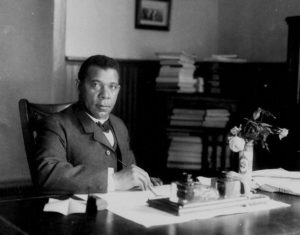 A bill to “establish a Normal School for colored teachers at Tuskegee” was passed and a grant of $2,000 was allocated for its construction and opening in 1881. To head the new school, Gen. Armstrong was asked to recommend a white man but instead recommended Washington.

He became a tireless promoter for the school, traveling far and wide to raise money and recruit faculty. One such notable person was Dr. George W. Carver who became director of the agriculture program in 1896.

By the time of Washington’s death in 1915, the institute “had more than 100 well-equipped buildings, 1,500 students, a 200-member faculty teaching 38 trades and professions, and a nearly $2 million endowment.”

1 thought on “Did You Know That Booker T. Washington Started the Tuskegee Institute?”