In the 1960s, the Civil Rights movement in the United States is remembered for the demonstrations and attempts at peaceful protests against racism and segregationist policies.

At the forefront of this movement were Dr. Martin Luther King and his approach to effect real change through non-violent protests. But there were many other organizations that strived to achieve the same goals. They included the Congress of Racial Equality (CORE), Student Nonviolent Coordinating Committee (SNCC), and King’s own Southern Christian Leadership Conference (SCLC) to name a few. But one group that promoted a different, more militant, path was the Black Panthers. 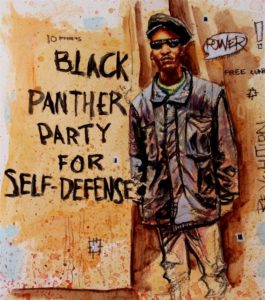 The Black Panthers were founded in 1966 by Huey Newton and Bobby Seale. The group was created as a reaction to the assassination of Malcolm X and the police shooting of an unarmed black teenager in San Francisco.

In the beginning, the Black Panthers were known for organizing police monitoring activities in Oakland, CA and other cities. They also believed in the arming of citizens for self protection.

The philosophy of the Black Panthers drew its influence from Marxist ideology. This was reflected in their “Black Panther Party for Self Defense Ten-Point Program.” The Program contained ten demands and ten beliefs. What are presented here are the ten demands in full:

As part of the Program, the Panthers promoted several social programs which were not as well known. One example was the creation of several free health clinics within African-American communities across the United States.

However, due to several internal controversies, shootouts with police, and heavy investigations by the FBI as a “communist organization,” the Panthers were gradually worn down and were officially dissolved in 1982.

2 thoughts on “Do You Know the 10 Point Program for the Black Panther Party for Self Defense?”