What is Kappa Alpha Psi?

Why It Was Started

Kappa Alpha Psi was founded to chart the course of Black students in institutions of higher learning, initially predominantly white colleges and universities, because rampant racism and social ostracism. African-Americans in the United States experienced racism that culminated in dehumanizing acts of discrimination, prejudice, indifference, and intolerance towards African-Americans in their daily life at these institutions across the United States. Although their numbers in universities were negligible, Blacks were barred from using university facilities including dormitories and pulled together to survive in such hostile environments. 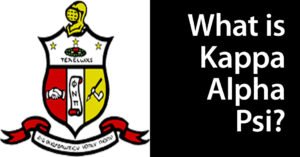 To meet its programmatic and organizational objectives, Kappa Alpha Psi:
• Sponsors programs that provide academic scholarship, social welfare, and community service.
• Mentoring and guiding young men with their Guide Right and Kappa League programs among other programs.
• Kappa Alpha Psi members are known for their prolific talent in step show performances.
• The organization provides great leadership, and as a result, their national educational programs have resulted in notable achievements for many members and the people they work with and support.

Why It Still Exists Today

• One of the fundamental tenants of the organization was an achievement –  so the organization aimed at devising ways of elevating Black collegians’ sights to enable them to reach their highest potential and the highest accomplishments possible. That purpose exists today.
• Membership in the organization requires a lifelong commitment to its ideals and lofty purposes.
• Since its inception, it has produced notable men who have excelled in their endeavors and carried on the legacy; for example, Cedric The Entertainer, Marc Lamont Hill, Mike Tomlin (Pittsburg Steelers head coach), Bill Russell (NBA legend), Colin Kaepernick, Thomas Bradley (Los Angeles’ Mayor), and Tavis Smiley (radio and television personality) among others.
• The office organizational magazine is the Kappa Alpha Psi Journal that has published four times every year since 1914.
• Although it is predominantly an African-American organization, it accepts any member regardless of race, creed or religion.
• Apart from the United States, the organization has undergraduate and graduate chapters in other countries like Germany, United Kingdom, Japan, South Africa, and Nigeria. Presently, there are 721 chapters in total.
• Different from some fraternities and sororities, it does not condone hazing or bestow honorary membership.
• The Grand Polemarch of Kappa Alpha Psi is Thomas L. Battles.
• The organization has grown to 160,000 members, making it one of the largest Black Greek organizations in the US.