Joseph Winters was an inventor who advanced the fire escape ladder that would years later help save countless lives. He created foldable or collapsible ladders that enabled fire trucks to maneuver into corners in narrow alleys and streets. He received a patent for the initial ladder and got another for further improvements made years later. 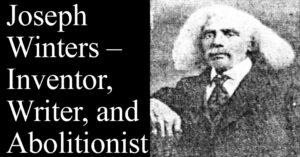 Joseph Winters was born on August 29, 1816 to James a brick-maker and his Shawnee Native American mother, whose name remains unknown to date. Winter’s mother was the daughter of a notable medical practitioner and herbalist named Betsy Cross. Winter’s was raised in part by his grandmother in Waterford, Virginia.

In 1840, Joseph’s family moved to Chambersburg, Pennsylvania. Young Winters started off as a farmer and later he would get a position to work with the Cumberland Valley Railroad. He was one of the mechanics.

Inventors George Kornelio and George Huttman were the first ones to introduce the idea of the wagon mounted fire escape ladder. However, a lot of people mistake Joseph to be the original inventor but that is not the case. Kornelio and Huttman came up with the idea in 1849.

Winters however disliked the idea of firemen having to carry ladders off their wagons to climb and rescue people. He invented a ladder with a sizer lift mounted on a wagon to make it easier for the firemen to spray water on fires from the truck. He also developed a ladder with parallel steps. On May 7, 1878 the inventor patented it. On April 8, 1879, Joseph received a second patent after making design improvements to the initial ladder.

During his life, Joseph became an accomplished hunter and fisherman. Growing up, Joseph was also a lyricist, composing a song that supported American politician William Jennings Bryan in the 1900 presidential campaigns. He also sang a song entitled “Ten Days after the Battle of Gettysburg”. This battle was fought during the era of the American civil war and Joseph recounted the chaos black people experienced. After this, the inventor wrote an autobiography with a similar title, but unfortunately the copies cannot be found.

Winters organized the famous meeting between American abolitionist John Brown and American social reformer Frederick Douglass. Joseph intended for the two great minds to chat and chart a path towards the eradication of slavery. Brown organized the invasion of the federal armory located at Harpers Ferry in Virginia. This incident precipitated the American civil war, where African Americans voiced the need for equal treatment of all races.

Researchers haven’t til this day been able to uncover whether Winters ever married. They are also unable to tell whether he had any children.

Winters died on November 29, 1916. His family laid him to rest in Mount Lebanon Cemetery in Chambersburg, PA. The Pennsylvania Historical and Museum Commission in 2005 erected a historical marker in honor of him.