Haiti’s History, The Present, and The Future

Do you know that Haiti (or Hayti) was the first independent Caribbean state and the first black-governed republic globally? This was after a successful slave revolution against the French colonial rule in 1804 that became a monument of national pride in the country and globally.

However, independence from French colonization didn’t put an end to Haiti’s problems or remove them from the shadow of colonial legacy. The country still struggles with dictatorships, political instability and natural disasters. Let’s look at Haiti’s history, its present status and its future. 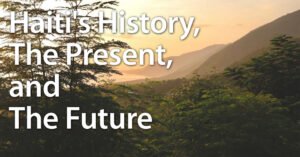 The History of Haiti

Haiti is a word coined from Taino, one of the indigenous languages of Haiti and much of the
The Caribbean. The name ‘Haiti’ means “land of high mountains”. Originally, the word was used to describe the entire island, but the French had other names for Haiti too that were popularly used at under their rule. However, the name Haiti stuck in English and ever since, the island has been known as such.

The Taino people were the indigenous inhabitants of the island of Hispaniola. Today Hispaniola has two sections, Haiti and the Dominican Republic. In 1492, the Spanish moved in and a quarter century later, the Taino population started dying rapidly due to disease. However, those who did not succumb to disease remained and refused to be subjugated despite this.

The Era of the Colonial Powers

For centuries, Spain and France, two of the main European colonizer nations imported large
numbers of slaves from Africa to work for them on the island. The slaves were mainly from the central and the western parts of Africa. The primary industries in Hispaniola were harvesting timber, coffee, sugar, and other profitable exports.

The French dominance increased in the early 1600s. They took up the western third of the
island and within a few decades they named it Saint-Domingue. The French established their control in the region for several decades with Africans serving as slaves and steadily growing their numbers.

In the late 1700s, the winds of change started blowing. Former slaves now freedmen Jean-
Jacques Dessalines and Toussaint L’Ouverture spearheaded a rebellion against French rule and dominance over the island. In 1804, Haiti became the first postcolonial black republic beating Napoleon and his formidable forces.

Haiti was largely expected to thrive after independence, but unfortunately, that wasn’t the case. The interference of foreign powers, disease, and domestic political upheavals crippled the country and its prospects.

For example, France gave Haiti its independence with the condition that it pay monetary reparations. These reparations would be valued at $22 billion in today’s economy. However,
Haiti struggled to repay this exorbitant sum and in 1825 they completed their debt repayment. However, that meant that, for about 120 years, the country had to use a large chunk of its revenue to pay the debt.

As a result, Haiti’s economy stagnated. A twenty-nine-year dictatorship did not help matters either. Francois Duvalier, and his son Jean-Claude, who took power after independence, crippled the country further through poor governance. Haiti lagged in areas such as education, industrialization, and development of its democratic institutions and government.

Today and the Future

Currently Haiti sits on the list of the top 15 most corrupt countries globally. Aside from that, modern-day Haiti is characterized by poor housing, poor infrastructure and overpopulation along the coastline where there are more job opportunities.

At one point in the colonial era, Haiti was one of the largest economies globally. Unfortunately, years of misfortune such repeated and severe natural disasters and bad governance have stripped away these financial gains. A lot needs to be done to regain the country’s lost glory.

There are bright spots however as the Haitian people are some of the most resilient people in the world. They people always endure, rebuild, and find ways to carry on. There is some foreign investment thought not enough, and the tourist industry is steadily growing and attract new travelers each season.