The Haitian Revolution Victory Sparked the Fall of Slavery and Must Be Acknowledged, Shared, and Celebrated!

The Haitian Revolution started in 1791 and continued until 1804. Today, the revolution is considered to be the Western Hemisphere’s most successful slave rebellion. During the 1700s, Haiti was known as Saint Domingue. Part of France, the area became the country’s wealthiest colony because of the crops produced. These crops included indigo, cotton, coffee, and sugar. Like the United States, Saint Domingue’s crops were managed by the institution of slavery.

In 1789, the French Revolutionary War broke out. This created an opportunity for the slaves of the colony that they had never seen before. The quickly took advantage of the opportunity. At this time, the white population rolled in at about 40,000 whereas the black population came in over 450,000 people. Not only was this hundred of thousands of more people compared to the white population, but it was also nearly half of the slave population in the Caribbean. The slaves were quick to realize that they were in a perfect opportunity to gain their freedom. They were sure to win, just by the numbers alone. 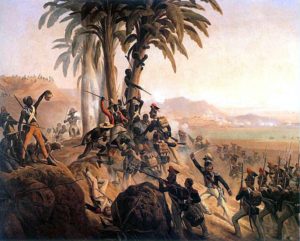 At first, the revolutionary movements were small in number but grew rapidly. More and more slaves became inspired by what they saw during the French Revolution. One of the first biggest steps of the Haitian Revolution occurred when the “Declaration of the Rights of Man and of Citizen” received approval from the National Constituent Assembly. This declaration gave citizenship rights to any man, of course, the document mainly meant planters. However, not too long after the declaration was adopted, the assembly did agree to include black men who owned a substantial amount of land.

Toussaint L’Ouverture would not stand for the declaration. Now known as “The Black Napoleon.” L’Ouverture led the most successful slave revolt in history. This slave revolt took place on the night of August 21, 1791. Today, this moment is called the “Night of Fire.” The slaves met at a specified location and then started to set fire to the homes of the planters. They did not have a specific route nor did they have specific people in mind. Their goal was to gain their freedom. As the group moved from location to location, the group grew as several other slaves started to join in on the revolt.

A few months later, the slaves controlled about a third of the island. By this point, violence had grown on both sides but  L’Ouverture was more determined than ever to free all slaves. Within a year, L’Ouverture had fought off the British army, which came to take over the colony and expanded the revolt beyond Haiti. Then, on January 1, 1804, the entire colony gained its independence, ending slavery, and officially taking on the name of Haiti.

News of the successful slave revolt and abolition of slavery reached various parts of the world, including the United States where the abolition of slavery had been a hot topic for decades. This created fear in the minds of slave owners all over the south. In hopes of stopping any type of revolt in America, southern states established new laws and plantation owners tried to keep the news away from their slaves. However, their efforts would fail as the Haitian Revolution continued to inspire the minds of slaves in the United States.