The Four Most Popular Haitian Dishes

Haitian gourmet consists of culinary traditions and practices from a wide variety of cultural
influences from the French, African, Indigenous, Spanish and Arabic people creating an
amazing creole culinary fusion. The exotic and contemporary dishes play a large role in
attracting tourists to visit Haiti. Here are four of most popular Haitian dishes that you should try for yourself and see if we are right: 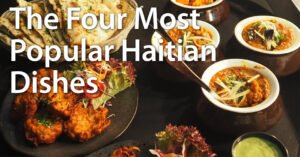 This is a very famous dish comprised mainly of well-seasoned and tender fried pork. It is
served with vegetables such as cabbage, onions, and usually marinated in spicy vinegar
sauce. This dish is among Haiti’s most popular and a favorite amongst Haitians and tourists
alike. If you want to have a great dinner with family and friends, you can get this dish in
Port-au-Prince, Petionville, and many other places in Haiti.

This is a combination of various fried foods and can be traced back to West Africa where
they have dishes with similar names.  Perhaps the simplest fritay is “patat”, slices of deep
fried white sweet potatoes typically served as a snack or side dish. “Bannann peze” is very
common in Haitian dishes as they are fried slices of green plantain that are pressed until flat and fried again. It is noteworthy to include that this dish is like how fried plantains are
prepared throughout various Caribbean countries which also share West African influences.
In addition, Fritay is found frequently in Miami at social gatherings in the diaspora Caribbean and Latino communities living there.

Said to be one of the most exquisite dishes hailing from Haiti, this recipe comprises a wide
variety of mushrooms found in Northern Haiti. The mushrooms are the most expensive
ingredients in Haitian dishes as they are sold for approximately US$64. The high cost is
because American markets import them in the dried state for the sake of preservation and as an island everything is more expensive due to heightened importation costs. Along with these base ingredients, the choice of either peas and rice or lima beans is available with seasoning to bring the taste to a different level. Diri Ak Djon is not served regularly in restaurants or served frequently at the Haitian family table. Instead, it is mainly reserved for special occasions such as holidays.

This dish is rich in history as it dates to the slavery era. It is a known past time for Haitians to recount tales of when the French colonizers used to eat this dish but forbade the slaves to eat it, much less lay a hand on the pumpkin used in the dish. The slaves had to revolt for years in order to earn their emancipation in 1801. Haiti was the first free black republic, so it is without a doubt fitting that Soup Joumou be eaten while re-telling their emancipation history each New Year’s Day. Along with pumpkin as a key ingredient, beef is included for the meat and you can add a variety of vegetables such as carrots, cabbage, celery, then a diverse array of seasonings.

Although there are many more popular Haitian cuisines, these four dishes are among the most popular. Haiti is known for many things but its foods stand out as it is filled with meaning, culture, and history too.