This biography highlights the life of Elijah McCoy, an inventor who developed lubrication devices to enhance train and railway operations. McCoy also made work easier for housewives when he invented the ironing table. In 1897, He received the US patent #150,876 for this Ironing Board. However, the US Patent #129,843 granted for improvements made to the Steam-Engine, remains one of his most well-known inventions. Here, we focus on his early life,works,the coining of the phrase “The Real McCoy” and other aspects of his life. 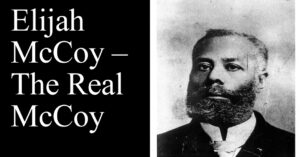 Elijah McCoy was born on May 2, 1844 to George and Mildred McCoy in Colchester, Canada. McCoy’s family were fugitive slaves running away from Kentucky to Canada using an underground railway. He became a freeman in 1844. McCoy’s parents had 11 children who they brought up at a time when segregation was at its peak.

The 1850 Common Schools Act advocated for the segregation and thus McCoy had to attend the Upper Canadian schools. In 1859 he was turning 15 and he moved to Scotland for higher studies. Later on, he received certification as a mechanical engineer in Scotland.

In 1868, Elijah McCoy married Elizabeth Stewart but sadly she died only four years later. In 1873 McCoy would marry Mary Eleanor Delaney. In 1922, the couple was involved in a ghastly road accident that killed Delaney and left McCoy nursing serious injuries. In fact, McCoy never recovered fully from the accident.

Elijah developed an interest in mechanics at a young age, which became the reason why his parents sent him to study in Scotland to pursue his dreams. Returning home to find his parents in Michigan, the young engineer had issues finding a job despite being highly skilled because of racial barriers.

Left with no option, Elijah had to take up a position in the Michigan Central Railroad as a fireman and oiler. He developed his first inventions during this period. McCoy noted the inefficiencies associated with the system of oiling axles at the time and invented the lubricating cup. The engineer’s lubricating cup had the ability to distribute oil in the engine’s moving parts evenly. He was granted the patent for this invention. The new invention ensured that trains moved over long periods of time without pausing for maintenance.

He continued with other inventions, eventually obtaining about 60 patents in his lifetime. Most of his inventions were related to lubrication systems. However, he had others in lawn sprinklers, ironing boards and other machines.

The “Real McCoy” and Its Significance

This term, “The Real McCoy”, is one of the most popular expressions in the United States and it refers to the real thing. More often than not, people use it incorrectly to point to Elijah McCoy’s oil-drip cup invention. Americans always use the term to mean they want the best quality of the best form of products or goods.

On October 10, 1929, Elijah McCoy died in Detroit in the Eloise Infirmary at the advanced age of 85. His family and friends buried him at Detroit Memorial Park East which is in Warren, Michigan.