Daniel Hale Williams was born in Hollidaysburg, Pennsylvania, on January 18, 1856.

A little less that twenty years after the ending of the Civil War, in 1883, Daniel graduated from Chicago Medical College with his M.D.[1] 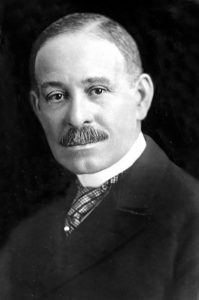 From the beginning, Dr. Williams, or Dr. Dan as his patients called him, was determined to change the medical profession in more ways than one.  Because he believed hospitals should become more interracial, he started his own practice in Chicago’s south side in May 1891, when he founded Provident hospital, the nation’s first hospital with a nursing and inter program that had interracial staff.[2]

It was in the summer of 1893 when Dr. Williams and his hospital made waves in the medical profession by successfully completing the first open heart surgery.  A young man by the name of James Cornish was brought in to Provident hospital after receiving a knife wound in his chest due to a barroom brawl.

Despite the surgery being known as risky, Dr. Williams knew he needed to try to save Cornish as he was bleeding to death, so Dr. Williams cut a small hole into his patient’s chest with his scalpel to explore the wound.  Dr. Williams found a severed artery and a gash is the pericardium, the tough sac that surrounds the heart.  He closed both wounds with sutures and several weeks later, James Cornish went home from the hospital.[3]

This surgery was performed without the tools of modern surgery, any surgical prep-work, anesthesia, x-rays, or any antibiotics.  This procedure skyrocketed not only the hospital but Dr. Williams as a skilled surgeon and became known as a pioneering heart surgeon when the medical profession was still growing. [4]

Throughout his medical profession, Dr. Williams continued to encourage the advancement of surgical procedures along with hospitals hiring multiracial staff.

He also co-founded the National Medical Association, a professional organization for black medical practitioners and became a charter member of the American College of Surgeons.