Despite the KKK and Racism, Matthew Henson Was the First Person to Reach the North Pole

Pioneer African American explorer Matthew Henson joined Robert Peary on several voyages around the Arctic with one of their destinations to be reaching the North Pole. Henson came into this world on August 8, 1866, in Nanjemoy, Maryland. His parents worked as sharecroppers, but because the Ku Klux Klan terrorized them, the family moved to a northern Maryland city called Georgetown. Henson credited hearing Frederick Douglass’ speech at ten years old for his inspiration to battle racism and be the best he could be.

While Henson received a little education as a child, he never learned how to read and write until he met Captain Childs while he worked as a cabin boy on the Katie Hines merchant ship. Through his work here, Henson traveled through Africa, Japan, China, and the Russian Arctic seas. After this journey, Henson returned to Washington D.C., where he started work at a clothing store. Here, he met Robert Peary, who asked him to come along on his next voyage with about 45 other men to survey Nicaragua. Henson impressed Peary with seaman skills and became Peary’s right-hand man on future voyages.

One of Henson and Peary’s first record-breaking voyages occurred in 1900 when they traveled farther north than any previous explorer. However, the pair would not stop there. In fact, they broke their record on their 1908-1909 journey when they traveled farther north, all the way to Greenland and towards the North Pole. This would be Peary’s eighth attempt to reach the North Pole. Henson and Peary left with a team of over 20 men, nearly 200 dogs, and almost 20 women, ten children, and 70 tons of whale meat. By the time the team reached the area of the North Pole on April 6, 1909, their team had dwindled to Henson, Peary, four other men, and about 40 dogs. While the team stated that they reached the North Pole, Henson was the first one person there. Nevertheless, other researchers have questioned whether they got that far or not. But whatever the case is, the voyage is still one of the most important in history because no other explorer had ever ventured so far north. 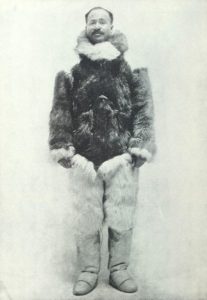 Once Peary and Henson returned home, people began to celebrate. However, most of the celebrations centered around Peary because Henson, as an African American, became overlooked. Even when Peary stated that he could have never made the trip without Henson, most people didn’t turn their attention to Henson.

For the remainder of his life, Henson worked in a New York federal customs house as a clerk. But he never forgot his days as an explorer, and in 1912, Henson published his first book, A Negro Explorer at the North Pole. A couple of decades, in 1937, Henson received the credit he deserved when he and Peary first came back home after their exploration to the North Pole. Henson became a member of the Explorers Club in New York. A few years later, in 1944, Henson received the Congressional Medal. During the 1940s, Henson worked alongside Bradley Robinson to publish his biography, Dark Companion, in 1947. He passed away on March 9, 1955, in New York City. At first, they buried him in Woodlawn Cemetery, with his wife Lucy joining him in 1968. In 1987, then President Ronald Reagan approved to move Henson and Lucy’s remains to Arlington National Cemetery, where Peary in his wife are buried, to honor the work of Henson.