Daymond Garfield John, born in 1969, became a household name for being the founder, creator, and CEO of the For Us, By Us (FUBU) brand.

As a young boy in Queens, New York, John’s entrepreneurial skills were developed at a young age while selling products such as T-shirts for $3 an hour. In high school, he was enrolled in a program that allowed him to have a full- time job while attending classes which assisted in developing his entrepreneurial mindset. Shortly after graduating high school, John worked as a waiter at Red Lobster but eventually had to decide what he wanted to do for the rest of his life. With the help of his mother, he learned how to sew with the intention of starting an apparel company for men. John, started out selling hats that he crafted for $10 apiece. He sold 80 hats to make his first $800 profit.

Daymond John’s mother, seeing her son’s long- term vision, mortgaged her house for $100,000 to fund his business. His company, FUBU (For Us, By US) launched in 1992. John was now splitting his time between FUBU and Red Lobster as he was “bootstrapping” and needed a constant source of income during his company’s early beginnings. FUBU’s popularity began to soar as many musicians and celebrities started to wear John’s clothing line in popular music videos. Even though his brand became popular, he still worked at Red Lobster until 1996 because he did not have enough money to quit at the time. After making his first million, John had a new vision for his company and saw a way he could make it even more successful. Within six years of the company’s start-up, FUBU generated approximately $350 million in revenue and today it has generated $6 billion globally. 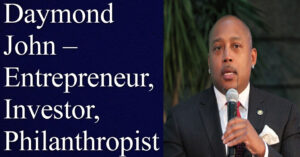 In the early 2000s, Daymond John’s brand was becoming less popular, but he was determined to keep pushing his name forward. This led him to join the television reality show known as “Shark Tank” as an investor. Shark Tank is a program where entrepreneurs pitch their ideas to investors in hopes of gaining start-up capital to grow and build their business. He lost $750,000 in the show’s first season, but this loss made a savvier businessman. In subsequent seasons, John made millions of dollars in profit from the many small businesses he invested in. With a net worth of over $300 million, John has stated that he yearns to once again become “hungry” for success, similar to the early days of FUBU. Thriving off that hunger mindset and using it to his advantage, he refers to this topic in his book “The Power of Broke”.

In addition to his business, Daymond John has several philanthropic ventures. He is the co-founder of Daymond John’s Success Formula, which is a program geared towards mentoring young and promising business owners. John is also a judge for the Network for Teaching Entrepreneurship (NFTE) events and is also on the Board of Directors. NFTE is a non-profit organization that helps young individuals from under-resourced communities build the requisite skills to successfully start-up businesses with the hopes of bettering society.