A Day In The Life of a NFL Prospect

I don’t know if people realize this but HBCU’s produce great NFL players. From Shannon Sharpe at Savannah State and Michael Strahan at Texas Southern to Walter Payton at Jackson State and Jerry Rice and Mississippi Valley, HBCU’s nurture athletic talents. We might not be the biggest schools in the nation. We might not have the most expansive team budgets our lavish television deals. However, we produce talent!

There are several HBCU alumni players that are in the league today. However, none are more notable than Oakland Raiders punter Marquette King for Fort Valley State University. Am I being biased. Maybe a little. But, King has true star apparel! We see him on TV all up in the NFL commercials. We see him all over social media. The brand that is Marquette King was home grown at Fort Valley State University.

I said all of that just to say this. With how incredible Marquette King is, you know if he has a mentor his mentor is someone you should pay attention to. His mentee’s name is Carlos Juan Serna, a punter/kicker at Fort Valley State University. The man is a superstar already! If I named all of is accomplishments the article would be a whole book! Serna is a multi-time SIAC All-Conference Kicker/Punter, 2017 Hero Sports Week 4 Specialist of the Week among other numerous awards and accolades that he’s accumulated during his four year tenure here at FVSU. But, the most awe-inspiring to me is the fact that he set the punting record for Fort Valley kicking a 86-yard punt. You know what’s more impressive? He broke the record set by his mentor, who previously kicked an 81-yard punt.

Serna is rallying support for his GoFundMe to get the necessary funds needed to continue his football career on the pro level. I got a chance to talk to him about his humble beginnings and his time at FVSU.

Randall: Thank you so much for this interview! I’m honored that you granted me the opportunity! Can you start by briefly telling us how you got your start in football?

Carlos Serna: Thank you but the honor is mine Mr. Barnes. Glad to be part of this interview! Many people don’t know that football was never my first sport. I’m come from a culture where Soccer is the most popular sport. However, I started my football journey in high school. I started playing in 2010 to be exact. Our team at Douglas County High School didn’t have a kicker. I knew the football coach personally so he came up to me one day and asked me if I would be willing to help the team. I honestly did not know ANYTHING about football but I could tell how important it was for the school so I agreed to play. First game of the season I bagged a 40 yard field goal and the rest was history.

Randall: Were you always a punter?

Carlos Serna: Yes! I also kicked and punted for Douglas County. I believe doing both really opened many opportunities for me that senior year. College Football programs love to scout Specialist that can do both kick and punt. There aren’t a lot of players like that left today.

When I first started, I was not that good when it came to punting . I loved Place Kicking in high school which took care of kickoffs, extra points and field goals. Punting to me became my favorite after my first lesson with Fort Valley Alumus Marquette King. I was never coached in high school and I’d never been to a camp. For me it was all YouTube videos until I got together with King and he really helped me.

Randall: How was your high school career?

Carlos Serna: My high school career was great. My first four years playing a new sport and I have to admit I did way better than I thought I would. I was also still playing soccer for the school at the time.  It was something special about playing under the Friday Night Lights that overtook me. That’s why I decided to go to accept a scholarship to kick instead of playing soccer . My senior year I ended up being part of the region team and the conference team.

Randall: What made you come to Fort Valley State University?

Carlos Serna: I would have to say because of  how consistent the coaches for Fort Valley were in recruiting me. They were contacting me daily. Around that time, I looked at other schools in the SIAC like Miles, Morehouse, Clark Atlanta and Albany State. There was something special about Fort Valley though. From the campus to the stadium and the staff I felt like I belonged here. That’s why I made my decision. The fact that Oakland Raiders very own Marquette King is my mentor helped a little too! lol

Randall: As we see, the team has improved over your tenure here. In the past two years we’ve beaten Albany State, won the SIAC Championship and even hosted the 2017 SIAC Championship game on campus. From your point-of-view, how has the Wildcat Football Team changed in your four years here?

Carlos Serna: I agree, our Football program has grown immensely over the past two years. I arrived at Fort Valley in 2014 and have been part of the program for four years. I’ve witnessed the transition we have made and I firmly believe that Coach Kevin Porter along with the new coaching staff played a huge part on getting the program to where it is now. We’ve built a strong foundation that will stand for many years to come . We work hard every day  we endure adversity and we’ve become better. Wildcat football has been and will continue to be dominant in the SIAC. 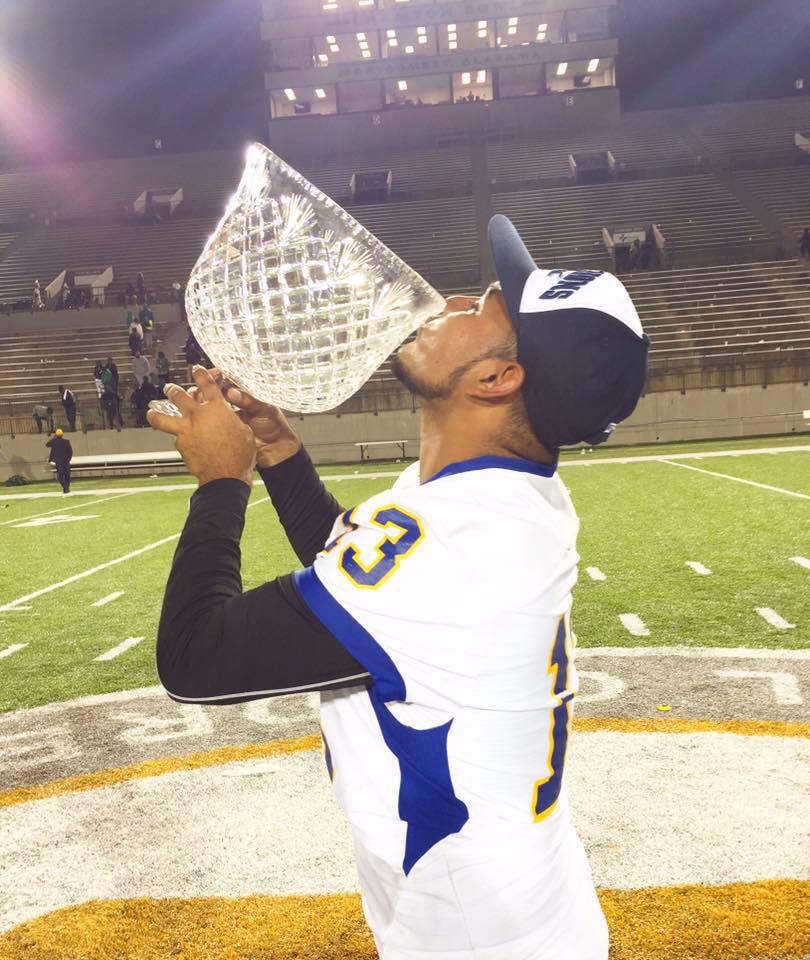 Randall: I’ve seen that you’re rather close with 2012 FVSU Alumnus and current Oakland Raiders punter Marquette King! What’s your relationship like with him? How did you meet him?

Carlos Serna: Yes sir , more than him being just a mentor, we’ve built a friendship. A brotherhood! I officially met Marquette King after my first year at FVSU. We hung out on the field and got some work in. I have to tell you, that guy is the funniest person anyone could meet . I’m sure you’ve seen his videos on social media! That’s really him! That’s him on and off the field. Never a dull moment! Every time he comes down to the Valley I get to hangout with him. We don’t even talk about football. We just hang out and have a good time, especially during our Basketball homecoming. 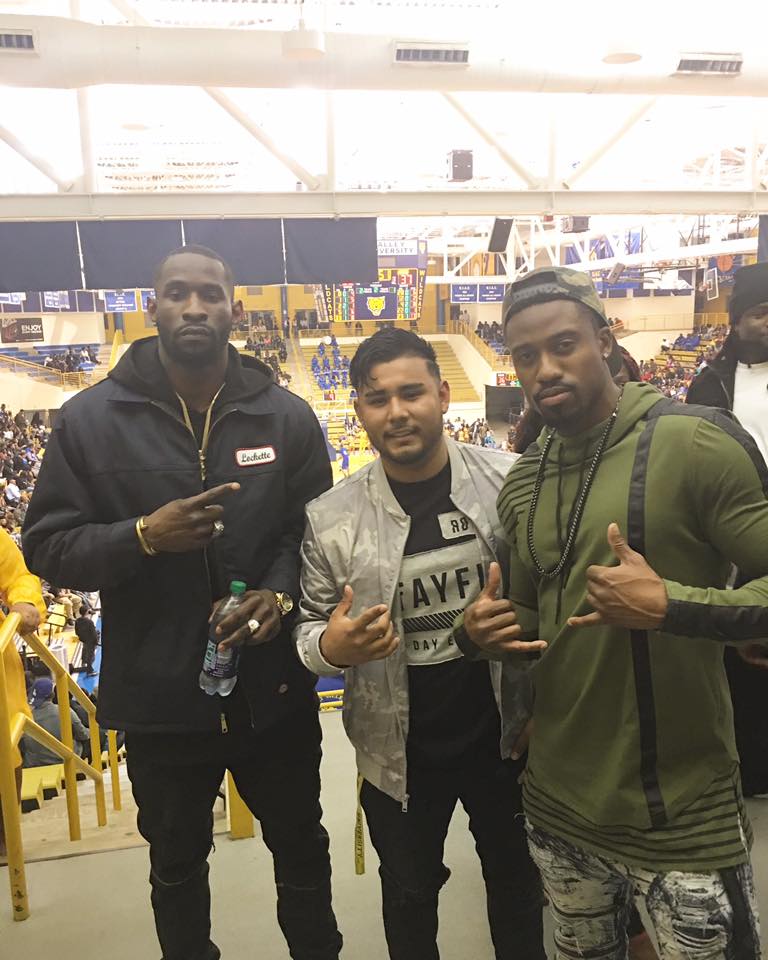 Randall: Tell us about your GoFundMe Campaign. What is it for? How will it help your future?

Carlos Serna: My GofundMe page was created to help me raise some money for a couple of football bowls I’ve been invited. The first one is the FCS Bowl played in Daytona Beach, Florida December 10th. The next one would be the All-American Bowl played in Minneapolis. The money raised will help me mostly pay for the registration fees as well as some of the travel expenses. Playing in these bowl is important for me because I plan on playing at the next level. It’s been my dream from the moment I set foot at Fort Valley State. I believe it would be a huge opportunity for me. These bowl games will have NFL scouts as well as CFL and Arena Football scouts. So please click on the link!. Any donation will help me! Thank you guys in advance. I couldn’t do it without all of you!

Randall: What’s next up for you? You’re graduating soon and just played your last year on the football team. Will we be seeing you on an NFL team soon?

Carlos Serna: I’ve played my last year here at Fort Valley State and I must say I enjoyed every bit of it. It was truly a blessing to come here and become a Wildcat! As for the NFL, that is my biggest dream. I will continue to work daily. That means improving on my craft , attending bowl games and kicking camps and hopefully get that one shot, that one opportunity I need.

Randall: Where can we find you and what can we do to help you raise money?

Carlos Serna: You can find me on
Facebook @ Carlos Serna. Instagram @carlos_serna95
You can also email me at
[email protected]

What can you guys do to help me raise money? Please share the link that will be attached on here. The link will directly send you to my GoFundMe Page. Share my story, and get people to donate! Like I said any amount is greatly appreciated any amount will help me get to where I need to be . I must thank you guys for all of your help and helping reach my goal and supporting my dreams of one day represent Fort Valley State University in front of the nation. Thank you every one, especially you Mr. Barnes for taking time out of your day to hear my story and help me in anyway you could. Thank You! It’s a great day to be a WILDCAT!