A Brief History of Juneteenth- What It Is and Why We Celebrate It?

Juneteenth is the oldest known celebration commemorating the end of slavery in the United States. Dating back to the year 1865, two years after President Lincoln’s historic Emancipation Proclamation when the Union soldiers, led by Major General Gordon Granger, who landed at Galveston, Texas with news that the war had ended and the enslaved were now free. Juneteenth, which is also known as Freedom Day or Emancipation Day, is a combination of June and nineteenth, in honor of the day that Granger announced the abolition of slavery in Texas. The emancipation proclamation marked a historical revolution for modern society as slavery in the United States had been practiced for roughly 250 years. But of course, it wasn’t until two years after the proclamation that it came into effect.

Lincoln’s freeing of the enslaved was largely only on paper, and the ongoing Civil War
prevented freedom from becoming a reality as many plantation owners withheld the news. They didn’t care about what humanitarians thought about them suppressing the news of freedom, because in their minds the negro people were a lesser people in comparison to themselves. Juneteenth marked a turning point in the fight to free African-Americans from bonds of slavery, and African-Americans in Texas (one of the last hold outs) and nationwide celebrated it as a day of freedom. There were other proposals for designating an official holiday to celebrate the end of slavery, but Juneteenth was the event that stuck. 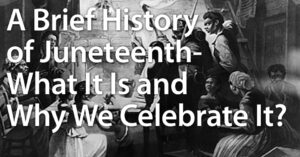 Juneteenth may seem like it’s only about the emancipation and the permanent end to the slavery in the US in 1865, but rather it commemorates a much smaller moment than what popular belief holds true. Juneteenth marks the moment when emancipation finally reached the deepest parts of the former Confederacy to the “hold out” states, as in the states that didn’t intend to honor the proclamation and instead suppressed the news to maintain their “way of life”. Some of the “hold out” Confederate states were Louisiana, Texas, North Carolina and Arkansas. Juneteenth represents more than just the abolishing of slavery, it signifies the years of oppression and delaying of rights and justice that black people in the US have had to suffer, unfortunately even after slavery on up to the present. After emancipation finally took hold throughout the south, Jim Crow laws were implemented, and unjust imprisonments, lynching, and the many other violent acts ensued against African-Americans in retaliation of this new reality. Today, national attention remains focused on acts of police violence, unnecessary aggression and use of force, and various other racial profiling incidents continue unabated. Unfortunately, the current racial climate demonstrates that while progress has been made in black America’s 150 years out of bondage, considerable barriers continue to impede progress towards full citizenship, equal treatment, and equal opportunity under the law.

Juneteenth is a tremendously important holiday and is celebrated widely in the United States. Juneteenth even has special cuisines prepared to commemorate the day. Watermelons and red soda water are the oldest traditional foods served on the day. In Texas barbeque is commonly served along with collard greens and sweet potatoes in homage to the foods traditionally prepared and served during the period of American enslavement. The traditional red soda water symbolizes the blood lost during the struggle for emancipation.

Now that you know the importance of Juneteenth, consider adding it to your important dates to observe and remember and create your own traditions to honor those who came before and paved the way for the lives we enjoy today!