Bessie Blount Griffin is best remembered for her 1951 invention of an electronic device that helped amputees feed themselves. The device was meant to assist solders injured fighting in World War II (WWII) from 1939 to 1945. WWII involved the alignment of the major world powers into two opposing military alliances in a supremacy struggle. A forensic scientist, physical therapist and inventor, Griffin also invented cardboard disposable emesis basin.

Known for: Significant contribution to the field of forensic science

Interesting Fact: She was left handed 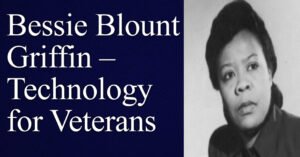 Griffin was born in 1914 to George Woodard and Mary Elizabeth Griffin, taking her grandmother’s last name –Blount- later in life. She attended Diggs Chapel Elementary School in Hickory, VA close to Norfolk. The school was established by the black community after the American Civil War to educate children of the formerly enslaved.

After Griffin’s parents relocated the family to New Jersey, where she attended Kenney Memorial Hospital in Newark. Griffin studied nursing, but unfortunately experienced difficulties finding a job after her studies.

Griffin would later go to Union Junior College- currently known as Union County College – to study physical therapy. She also studied in Panzer College of Physical Education and Hygiene in New Jersey and secured a job at Bronx Hospital. A large number of the patients Bessie treated were World War II veterans. She taught these veterans to write using their teeth.

During the 1970s, the police departments across Virginia and New Jersey depended on her services as a chief examiner. In 1977, Griffin was invited by the British police in London to assist them with handwriting analysis. Bessie was the first African American woman given the opportunity to work with the London territorial police force, the famous Scotland Yard.

Griffin developed her first design of a feeder over the course of 10 months and named it an “invalid feeder”. Griffin did her design work in her kitchen and would use a file, plastic, an ice pick, dishes and a hammer. She melted plastic into a mold using boiling water. Bessie received a patent for this invention. Later, she would spend $3,000 of her own money making improvements to and developing a better working model out of stainless steel.

Griffin’s feeder operated when the patient bites down on the tube for activation at which point it would dispense the food. This tool would shut off automatically between deliveries to give the patient time to chew the food.

Griffin expected the U.S. Army to embrace her device, unfortunately it didn’t. However, she succeeded in finding a Canadian company to manufacture it. The director emeritus of the American College of Surgeons Dr. Malcolm MacEachern hailed Griffin’s invention as an ingenious one.