Benjamin Banneker was born on November 9, 1731, in Baltimore County, Maryland. His parents, Robert and Mary, were freedmen (who had been formerly enslaved) and lived on a 100-acre farm near Patapsco riverbank, Baltimore County. His grandparents, parents, and siblings were staunch Christians, he followed Christian ideals and read the Bible daily as he grew older.

Schooling
Benjamin Banneker learned reading at home but later attended Quaker County School. However, he was forced to drop out and work on the family farm where he grew tobacco. He was a voracious reader and was mostly a self-taught reader. He showed remarkable mechanical ability and a proclivity for mathematics.

In his early years, he created and solved mathematical puzzles and studied planets and star movement. He studied astronomy through books and equipment loaned from a neighbor (George E. Ellicott). A year later, he correctly predicted a solar eclipse. 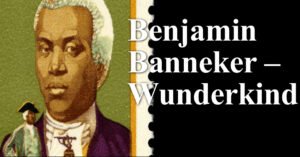 He authored a series of almanacs based on his knowledge of astronomy. His almanacs contained information of other scientific realms such as medicine and medical treatment, eclipses, listed tides, astronomical information, and he did all the calculations himself. Contrary to some earlier almanacs, Banneker’s delivered accurate information.

In 1790, he hoped that his ephemeris (astronomy and celestial navigations) for 1791 would be included in a published almanac, but he could find a printer to do so. However, in 1792, printers published and sold his work. The early editions of Benjamin Banneker’s work achieved commercial success due to the support of the Elliotts and
abolitionists.

After his last known issues of almanacs were published in 1797, he computed a cycle of a seventeen-year locust, wrote a treatise on bees and yearly ephemerides till 1804.

Abolition and Advocacy against Racism

His correspondence with the then Secretary of State, Thomas Jefferson, centered onslavery and racial equality and was highly praised by racial equality advocates and abolitionists. He also wrote essays and letters that denounced racism.

He created a wooden clock in 1753. The clock lasted until his death. Because it was the first clock invented in America, many people from far and wide came to see it.

He designed irrigation system that helped mitigate the effects of dry spells. It is from his designed wheat farm that U.S. troops were saved from starvation during the Revolutionary War.

During the surveying of the present Washington, D.C.’s location, he was involved because of his knowledge of astronomy. When the Frenchman, Pierre L’Enfant stormed out with the only set of plans, Banneker re-created the plans from memory.

Benjamin Banneker’s manuscript journal and a book are some of the only memorabilia that have been preserved as most of his writings and belongings were destroyed by the fire that caught his home during his burial. His accomplishments inspired later generations, and some institutions and facilities have commemorated his outstanding
works. For example, in 1980, the United States Postal Services had a stamp issued in his honor. He was never married and died in 1806.