Alexander Miles was born in 1838 in Duluth, Minnesota. He moved to Waukesha, Wisconsin where he earned a living as a barber in the 1860s. Later he moved to Winona, Minnesota in 1870, where he met his wife, Candace J. Dunlap, a white woman born in New York City in 1834. Together they had a daughter named Grace who was born in April 1879. Shortly after her birth, the family relocated to Duluth, Minnesota.

While in Duluth, Alexander operated a barbershop in the four-story St. Louis Hotel and purchased a real estate office. While his wife found work as a dressmaker. Miles also became the first black member of the Duluth Chamber of Commerce. In 1884, Miles built a three-story brownstone building at 19 West Superior Street in Duluth. This area became known as the Miles Block. It was at this time that Miles was inspired to work on elevator door mechanisms. 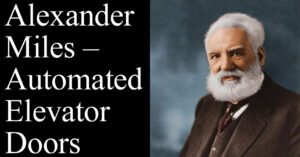 Miles improved the elevator by automating the opening and closing of the elevator door. His invention entailed the use of the movement of the elevator cage. In addition to this, there was a flexible belt that had to go over objects known as drums for the doors to open and close. Thanks to his revolutionary invention, which continues to impact the design of modern-day elevators, he was awarded a patent in the year 1887.

In his later life, Alexander Miles took an active role in politics as well as fraternal organizations. In Duluth, he sold real estate, then he moved to Chicago where he established a life insurance company that helped black people who were often denied life insurance coverage. This company was known as The United Brotherhood. Miles and his family lived a prosperous and comfortable life until his investments were greatly affected by the recession. This impacted his life so significantly that he had become a barber once again which was his occupation years before. From once being known as the wealthiest African American in the Pacific Northwest due to successful investment ventures, he and his family had to resettle in Seattle, Washington when the recession damaged his businesses.

Alexander Miles died in 1918 and it was not until 2007 when was he inducted into the National Inventors Hall of Fame.