5 Black Astronauts You Should Know

Going to space is a venture most people want to do. It’s good to dream. Those who were daring and capable enough to go are celebrated across all nations throughout the world and will forever be legends. Among them were remarkable black astronauts that should not be forgotten. The following are 5 of the first black astronauts ever go to space. 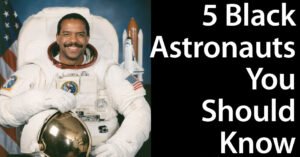 Bernard Anthony Harris Jr. was the first black man who walked in space. Harris became an astronaut in July 1991 and qualified for assignment as a mission specialist on future flight crews. It was during his second space shuttle flight that he performed the spacewalk. It was a major milestone, especially to the black community. This experience made him a global icon. In addition to his excellent performance at
NASA, he is a surgeon, entrepreneur and researcher who continues his work and who also formed a non-profit Harris Foundation.

Wilson was first selected by NASA as an “Astronaut Candidate” in April 1996 in 1996 and flew her first mission (STS-121) to the International Space Shuttle in 2006. Initially, she was assigned technical duties working with the space station payload procedures and payloads at the astronauts’ office space station operations branch. Stephanie is the second African-American woman after Mae Jemison to go into space has thus far flown in three on board space shuttle missions. Throughout her career, she has logged over 42 days in space, the most of any African-American astronaut so far.

Bluford was the first African-American astronaut in space. Before the beginning of his adventurous career as an astronaut, he was an officer in the U.S. Air Force, where he worked before being assigned to NASA, rising to the rank of colonel. He experienced his earliest flight in 1983 as a member of the crew of the Orbiter Challenger on the mission STS-8. He became the first African-American man in space as well as the second black person in space, after Cuban cosmonaut Arnaldo Tamayo Méndez.

Back in 1992, Scott was chosen by NASA for astronaut training. He served as a mission specialist on STS- 72 in 1996 and STS-87 in 1997 and logged a total of 24 days, 14 hours, and 34 minutes in space, including three spacewalks totaling 19 hours and 26 minutes. Scott was also a naval pilot and flew helicopters and navy planes prior to joining NASA. He conducted a spacewalk during which several techniques later used in the International Space Station’s assembly were evaluated and demonstrated.
Winston E. Scott performed a total of three spacewalks prior to his retirement.

Joan Higginbotham is an American engineer and a former NASA astronaut. Joan was first selected as an astronaut candidate by NASA in April 1996, Higginbotham reported to the Johnson Space Center in August 1996. She flew aboard Space Shuttle Discovery mission STS-116 as a mission specialist and is the third African-American woman to go into space, after Mae Jemison and Stephanie Wilson. Higginbotham logged over 308 hours in Space on mission STS‐116 and is the recipient of the NASA Exceptional Service Medal.
All the astronauts who accomplished the missions have proved that nothing is impossible. If you want something badly enough, the sky is NOT the limit. To learn more about careers an astronaut at NASA
visit: https://astronauts.nasa.gov/content/application.htm