4 Haitian Traditions That Make It So Unique

Haiti is the second largest island of the Caribbean with beautiful mountains and breathtaking scenery. Despite its struggles and painful past in the hands of the French colonizers, the Haitian people have preserved their culture. Most of the traditions are a blend of African, Indigenous, and European background reflecting on their unique history and approach towards family, art, faith, spirituality, and day-to-day lifestyle. So, what makes the Haitian traditions standout? Let’s find out! 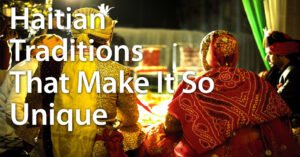 Haiti is famous for its mix of religion and cultural practices. The Christian beliefs came from the European nations influencing the Africans to convert abandoning some African-originated cultural practice. At least 80% of the Haitians are Catholics while 16% are Protestants. Others practice voodoo also referred to by some as “black magic”. The natives use voodoo to summon ancestral spirits for answers, appease bad spirits, heal the sick, and bring peace to chaos and pain. Of course, Christians in the area do not agree with the method and go so far in some instances as to condemn it.

Typically, Haitian art is depicted in big, bright colored and vivid paintings capturing the rich landscape, delectable foods, beautiful women, the ocean and majestic mountains of the island. Artists paint in symbols that have a deeper meaning to them. For instance, the painters want to tell stories or pass hidden messages and use people disguised as animals and animals transformed into people to convey deeper meanings and cultural lessons.
Haiti’s culture, dancing, fashion and traditional cuisines attract attention from the world over for its uniqueness and the beautiful fusion of it. It’s their diversity and rich flavors that make their culture so unique. During the annual festivals like “Carnival”, people come out and show their skills. They dress in colorful clothes with flowers around necks and celebrate their fascinating traditions.

The Haitian people take care of their own and protect each other as a community. They value family and make decisions that affect their health, lifestyle and children positively. The people live closely with the extended families helping each other to work, survive, and raise children. This way they can pass on their beliefs and traditions to their offspring and live harmoniously as one people.

Haitian folklore is rich in magical tales revolving around voodou practices and traditional spiritual belief. The tales were used by the Haitian dictator Papa Doc to manipulate, prey upon, and scare the locals and enforce the beliefs of his brutal regime. The folklores involved mischievous characters or strange ways to appease the “lwa” or bad spirits in the land. In order to keep the peace between the living and the dead, it is believed that people were sacrificed to the bad spirits to appease them. Haiti is a beautiful land that has evolved over the years. The local Haitian community actively works to preserve their unique culture and to protect it from outside influences. Although they have adopted some things from the colonial history, they have been careful not to allow that history to corrupt their
customs.