3 Ways to Celebrate Juneteenth As A Family

Juneteenth is a celebration held on June 19th every year to commemorate the
independence of African-Americans when the news of freedom finally reached all
enslaved African-Americans and “officially” ended. It involves a celebration of the rich
culture, history, and progress African-Americans have made since then. On June 19,
1865, complete Emancipation was celebrated for the first time, two and a half years
after the signing of the Emancipation Proclamation. Since then, Juneteenth has been
observed in various ways. In 1979, it was made an official holiday in Texas; and since
then many other states followed suit. Below are three ways to celebrate Juneteenth as a
family: 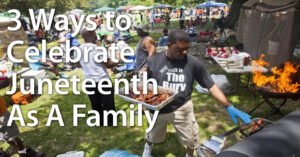 Feasts are traditional and important ways to celebrate Juneteenth as a family. You can
organize a family gathering, and you can also invite friends. You can use Juneteenth
themes to decorate your home in preparation for the feast. There are many Juneteenth
branded T-shirts, jumpers or jackets and more available from many African-American
vendors. During the meal, family members can share anecdotes that will educate and
benefit younger generations; for example, they can describe how Juneteenth has been
celebrated in the family over the years.

Another way to celebrate is to plan a “traditional” Juneteenth menu. You can find great
recipes in cookbooks like The Black Family Reunion Cookbook that in addition to
amazing food recipes also represent the many traditions, strengths, and values of black
Americans. In Juneteenth, it is customary to involve red foods to symbolize the
resilience and ingenuity while in bondage and the blood of those lost in the fight for
freedom. These foods include watermelons, strawberry pie, hot sauce and red
beverages like kola nut tea. Examples of other common foods are charcoal-grilled meat
and black-eyed peas. There can also be outdoor cookout incorporating traditional foods
like barbecues.

During Juneteenth, there are several events specifically organized to commemorate the
freedom from bondage. Some are held in institutions, museums, and cultural centers. In
such events, there may be speakers, whole family activities, games, and shows. Also,
there may be books rich in cultural heritage, meals, crafts, visits to historical homes,
dance performances, and storytelling.

Some organizations also teach the community about the history and work to educate the
community on various issues like social justice and enslavement. The organizations
hold festivals in different areas and incorporate live performances and storytelling.
Some also have places reserved for kids.

As the adage goes, “Knowledge is power”, so with this event, sharing such knowledge
is imperative, especially for children. Books are one of the ways to celebrate Juneteenth
as a family; you can read and share the stories with children. This will help readers to
learn about the slavery, rich heritage, traditions and values of black Americans. There
are enough children’s literature and other books out for you to explore with your children
and family members; for example, Juneteenth: A Celebration of Freedom is a good
place to start.

Jubilation reigned in Texas after Gordon Granger together with the Union Soldiers
arrived in Texas in 1865 to announce that Emancipation had been declared and must
be honored. Since that day, celebrations have been held every year since. There are
various ways and reasons to celebrate Juneteenth as a family, the most important being
the advancement of African-Americans.