In 1965 Mr. Lawrence Huggins Led A march of 105 African American Educators To Attempt To Register To Vote

Less than two months before Bloody Sunday, on Jan. 22, 1965, Mr. Lawrence Huggins, an educator in Selma Alabama participated in & led a march of 105 African American educators to the steps of the Dallas County courthouse in Selma to express their support of voter rights and to attempt to register to vote.

This newspaper clipping Mr. Lawrence Huggins as he attempted to enter the courthouse to register to vote and was struck numerous times in the stomach by Sheriff Jim Clark who had refused the teachers entry. 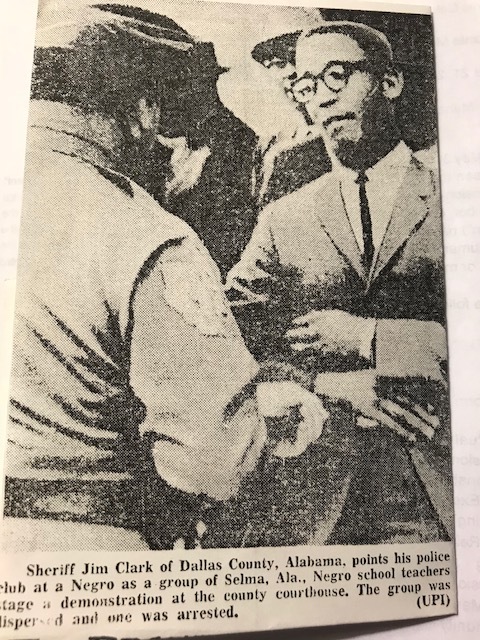 Never before had Black educators openly supported the voter’s rights movement and were considered by the young activists as “Uncle Toms” because, at that time, the teachers were paid more than most plus salaries were controlled by the State, therefore, they had a lot more to lose than most Black folks.

One political official is quoted as saying that this display of support was like “Putting their heads in the lion’s mouth”.
Although there was no “bloodshed” this time and even though the police were successful in turning the teachers back by using their billy clubs and feet, when the teachers walked back to Brown Chapel from the courthouse they received a standing ovation from a large group of students that were proud of the stand and courage the teachers portrayed and at the time, Andrew Young had said of the march that it was “One of the most significant things that had happened in the movement” at the time.

Mr. Huggins, activist and original foot soldier and survivor of Bloody Sunday, still resides in Selma where he regularly volunteers at the Voter Rights museum in Selma as a tour guide.