Why We Should BOYCOTT the NFL if Colin Kaepernick Isn’t Signed? | Are You Down?

Urban Intellectuals posted a question on our Facebook page that prompted this article. We asked the question, if Colin Kaepernick isn’t signed, will you ban the NFL?

The responses ranged from absolutely to why would I do that, I love football. Obviously, we’ve been excited to see the support for the movement and disappointed in many of the same selfish, apathetic behaviors that have kept us subservient for centuries.

Granted, Kaepernick isn’t the star QB many NFL analyst suspected he could be when he first started in the league. However, the man has led his team to the Superbowl, which is something most QBs can’t say, is still one of the most athletic players at the position in the league, had a decent year on a poor team last year and is clearly better than the majority of backup quarterbacks in the NFL.

So, why isn’t he signed?

The short answer is the NFL doesn’t care for “Black issues”, which are really human rights issues if they see us as humans. To this some say the NFL can’t be racist because all the Black players currently signed in the NFL. However, to that, I say this:

“Y’all think a bunch of A-political Black men with jobs mean the NFL isn’t racist???? When you being a “Good Ni**er” you can stay, but when you speak up and have opinions about injustice….well??”

Sources contend that the NFL executives hate Kaepernick and the “controversy” he brings to the locker room. Controversy? By kneeling during a song? Protesting the absolute murder and destruction of an innocent people? …..all of which are inside of his constitutional rights.

Let me get this straight, the NFL is welcoming to people who have murdered individuals (Ray Lewis), raped multiple women (Ben Roethlisberger), knocked out his girlfriend (Ray Rice), and come to work on drugs (Johnny Manzel), but if you are politically aware of the destruction of a race of people you are out?

I’m not going to try and convince everyone that they need to stop supporting the NFL if Kaepernick is black balled, but you? I can’t understand why you wouldn’t.

This man stood up for you when he didn’t have to and lost millions of dollars in salary and endorsements in the process. It is YOUR children, uncles, wifes and family that are in jeopardy, not his. He has enough money and fame to avoid many of the issues and pitfalls we face in America, but that didn’t stop him from bringing an important issue to the forefront by taking a knee…

….and you won’t turn off the tv when the NFL blatantly shows you that their constituents, fans, advertisers and executives don’t give a damn about the death of your children at the hands of the police?

It is our lack of collective effort, energy and unity that makes us easy targets AGAIN AND AGAIN in this country. They can do whatever they feel like it because we REFUSE to come together and do something about it as ONE.

It’s time to stop bitching, moaning, and complaining once we have been wronged. It’s time to stand in unity. If not now, then when? 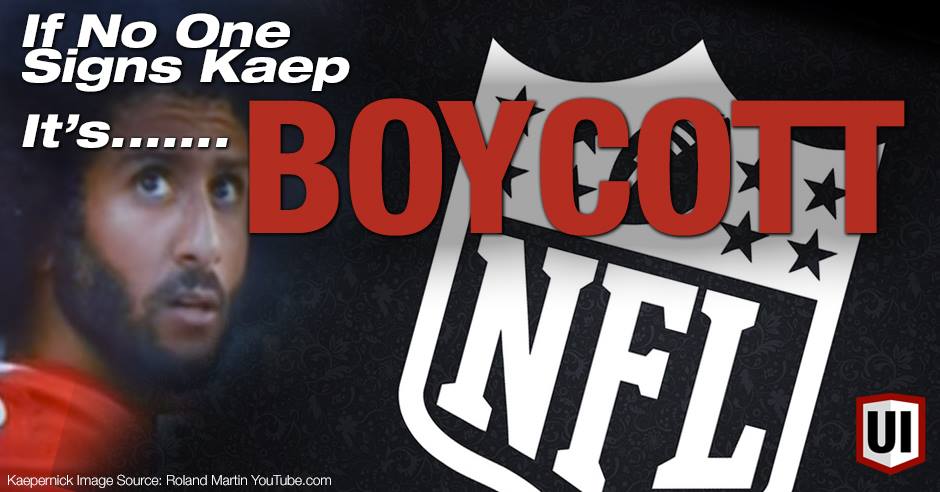 We use information collected through cookies and similar technologies to improve your experience on our site, analyze how you use it, and for marketing purposes.
Why We Should BOYCOTT the NFL if Colin Kaepernick Isn’t Signed? | Are You Down?