Who Is The Thug? The 6 Mug Shots of George Zimmerman.

The word ‘Thug’ has been tossed around to describe black people in this country for decades now as a substitute for Ni**er. Every since the country developed a minute consciousness that drove them away from overt racism, bigotry and hatred, thug has served as a useful alternative, but we understand the intent and meaning behind the word.

The word ‘Thug’ has been used to described the so called African American even when they were the victims of heinous acts committed by white people or even the police. Hell, even Richard Sherman was called a thug for being out spoken and unyielding to the white power structure while in front of cameras during football season. And you already know what they thought about Marshawn Lynch for not being spoken enough. 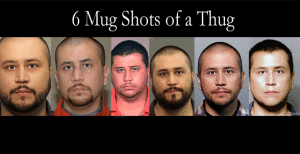 Who Is The Thug?

George Zimmerman was the poster boy hero of some white and racist people in this country a few years ago when he shot and killed, in cold blood, an unarmed black teenager by the name of Trayvon Martin. Zimmerman made up some BS story about being attacked by the teen, but Florida’s controversial Stand Your Ground law made it totally acceptable to shoot and kill the unarmed teen.

The wild thing about this case is the media angle of the story and the perception of Trayvon that was drug through the mud as the trial built up. People actually created the image of young Trayvon as the ‘Thug’ that needed to be killed. You know, all young black men are somehow perceived as dangerous and worthy of being killed even if it is for nothing more than carrying a juice and some candy.

Zimmerman was regarded as a hero, a pillar of the society for killing an unarmed black teen in cold blood….but what has he been up to lately?

I don’t know what societies definition of a THUG is these days, but the rational mind sees it as a person that is a general menace to society. And guess who fits that bill? That’s right, your boy George Zimmeran.

Pictured are the six mug shot photos of George Zimmerman, most of which were taken after he murdered young Travon Martin. And here are a list of his activities that led to run ins with the law and those mug shots.

— July 2005, Zimmerman was arrested and accused of resisting an officer with violence near the University of Central Florida campus after a scuffle with police. The charges were eventually dropped after Zimmerman entered an alcohol education program.

— February 2012, Zimmerman fatally shot 17-year-old Trayvon Martin during a confrontation in the community where Zimmerman was a neighborhood watch volunteer. Zimmerman was charged with second-degree murder but acquitted after a trial in July 2013.

— July 2013, police in Foley, Texas, stop Zimmerman for speeding in a 60 mph zone. Zimmerman is let go with just a warning.

— September 2013, Zimmerman’s estranged wife, Shellie, dials 911 and tells a police dispatcher that her punched her father and threatened her with a gun. She later decides against pressing charges and authorities announce in November they are dropping the case.

— September 2013, a Florida Highway Patrol trooper stops Zimmerman along Interstate 95 and issues a warning because the vehicle’s tag cover and windows were too darkly tinted.

— November 2013, Zimmerman is arrested by Seminole County authorities after a disturbance at a home in Apopka.

— Jan. 2015 – George Zimmerman has been arrested and charged with aggravated assault with a weapon in another domestic violence incident

You tell me who the THUG is?