While You’re Thinking the Law Is Always Right, Remember These Six Forms of Oppression Were Legal

It amazes me when speaking to people how they automatically default to the law as being right. As if laws are sent down from heaven above for all people to adhere and follow to the letter. I won’t go too far into natural law and man-made law, but let’s just say the supreme laws of the universe outweigh anything man could ever

Newsflash, laws are created by people. And particularly in the Western hemisphere, these laws are created by White men in little rooms with very little input by the greater society, so you must know they are even that much more prone to being unjust.

So before you go about your day thinking all laws are just and should be followed, allow me to give you a brief reminder of six unjust laws that were deemed legal and voted into reality by the governors of the Western hemisphere.

The European colonial period was the era from the 16th century to the mid-20th century when several European powers established colonies in Asia, Africa, and the Americas.

Slavery is, in the strictest sense of the term, any system in which principles of property law are applied to people, allowing individuals to own, buy and sell other individuals, as a de jure form of property. A slave is unable to withdraw unilaterally from such an arrangement and works without remuneration. Many scholars now use the term chattel slavery to refer to this specific sense of legalized, de jure slavery. 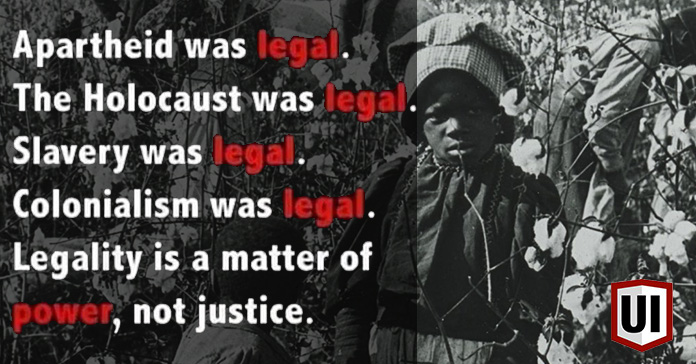 Redlining is the process of refusing (a loan or insurance) to someone because they live in an area deemed to be a poor financial risk. The practice was used in the United States, specifically, to keep the Africans in America out of areas deemed to be for White people.

The Jewish Holocaust also referred to as the Shoah was a genocide in which some six million European Jews were killed by Adolf Hitler’s Nazi Germany, and the World War II collaborators with the Nazis

Apartheid was a legal system of institutionalized racial segregation and discrimination in South Africa from 1948 to 1991.

Note: Yes, I used Wikipedia for many of these definitions, GASP. Stop acting like the definitions aren’t accurate. No, this opinion piece isn’t being submitted for scholarly credit, so please relax, take in my point and let’s discuss further.

Secondly, I like to use the term Jewish, actually so-called Jewish, Holocaust when referring to what the Nazi’s did. Not trying in any way to indicate this event didn’t happen, merely pointing out they don’t own the word holocaust and it applies to other atrocities done in world history, namely the African holocaust.

Now that those housekeeping items are out of the way, hopefully, you can begin to see my point. The laws made by man are not justice by default. They still need to be weighed and measured against common sense and natural law.

No man has the right to own another. This idea of people being property is absurd, but those that believe every letter of the law is justice would have followed in lock step if they were born back in these days without the ability to think, discern and make their own informed decisions.

I’m sure there are dozens of more examples where the law isn’t reflecting justice. Here the ones you can recall in the comments.