UI Meme of the Day, A Daily Series…Today’s “meme” is actually a political cartoon for a cartoon-ISH nation.

The Republican’s people have spoken. America, enjoy your Benghazis and your “asparagus.”

The People Have Chosen

We make no assumptions about the people who voted in the mid-term elections “Democrat send-off” yesterday … Black, white, whomever, or wherever, your elected officials now do all of the talking for you, whether you like it or not.

Rest assured, you will watch them take down the elected President in the most hurtful way that they can, as an example and an expression to you that white supremacy still rules the day in the USA and if you ever think there will be another “ni&&er” President, think again.

For those who did not vote, stand down.

The next sound you hear will be that of complete and utter silence from you, because what you allow is what you will receive. You have no sovereign cause for complaint.

The Republican Party of the United States of America has taught us all a thing or two: That they can and will remove your right to be equal citizens in America as they please to do so, and that you do not vote unless they want you to (and the only ones they want voting are the ones who will vote for them); AND that those who do not comply with their orders and cannot be bought off, will be killed. It’s as simple as that.

It is the way of the Roman Empire upon which they founded this incorporated citizenry.

This nation could never have a righteous man to rule it, and Obama was placed in position to show the world why America will be destroyed. When it happens, do not weep. It will be too late.

Obama himself has even discovered, we are certain, that the only reason he is still alive is because his presence is something for them to ridicule Black people over. It gave this maladjusted society a victorious platform on which to swarm and come out of hiding. It gave them the opportunity to show that, in America, the cockroaches eat at the tables and throw the people the crumbs. They make for festering wounds and multitudinous diseases and you, as they have told you over and over again, have no choice but to subject yourselves to it–whether you like it or not.

The Republican people have chosen.

It is the way of the Roman Empire, the Nazi, the Ashkenazi, the Zionist, and the richest Saudis who are only alive because they do what America wants them to do … and it is the way of those who value money over humanity. It is also the way of Roman idolatry and heretical belief systems that have nothing to do with the God they claim they believe in.

They “run with the wolf packs” and there they shall forever remain. However, unlike the wolves who taught them, they do not kill to survive, they kill because it is fun for them to watch and do and see happen to others. They are Hunger and you are the Games. 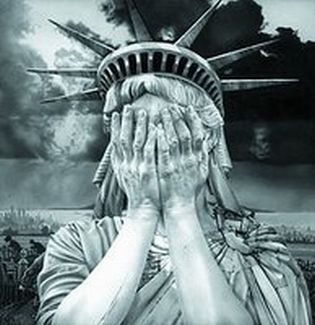 The day of ‘just compensation’ is due and owing.

America is like an abused woman who enjoys the abuse and will forgive her bastard lover and his whoremongering friends for all of their transgressions, even if he does not deserve to be loved, let alone admired or respected.

Expect that this nation has lost all credibility in the world’s scope of vision.

This has been the case for some decades now, and nothing President Obama could do to preserve it will delay what has been coming for decades. He was only put there so that the world may know. When you see it fall, and it will, you will understand why and will put your tears away, because by then it will be far far too late.

Asparagus is a diuretic, correct?

Perfect for that “trickle-down” effect that they enjoy so much at your expense.

What happens next is what was slated to happen since this nation was taken over by those to whom it does not belong: Enjoy.

Proverbs 16:4 – The LORD works out everything to its proper end– even the wicked for a day of disaster.

Oh, there is “good” news, by the way. This ought to give you, Black America, every incentive to find out who is running your state, your counties, your townships, cities and parishes and pay them a little visit to let them know that every step they make and every breath they take…