So far, alternative facts have been the overlying theme of Trump’s presidency. Everybody associated with him seems to lie when it’s convenient and shift truth whenever possible to fit their agenda. The latest culprit is Pastor Darrell Scott, who said at the Black History Month meeting on February 1st that “top gang thugs” reached out to him in support of Donald Trump. The gang has no name and he didn’t cite any specifics about his communication with this individuals.

Scott said, “I was recently contacted by some of the top gang thugs in Chicago for a sit-down. They reached out to me because they associate me with you [Trump]. They believe in what you’re doing. And they want to have a sit-down about lowering that body count.”

It didn’t take long for Pastor Scott to walk his comments back. He did an exclusive interview with Chicago news affiliate Fox 32 denying that he even said the comment, even though it was recorded. Pastor Scott even attributed a lack of sleep to his off-base remarks. The black people that Trump has close to him seem a special type of crazy. They seem like the type to spit in your face and tell you that it’s raining. 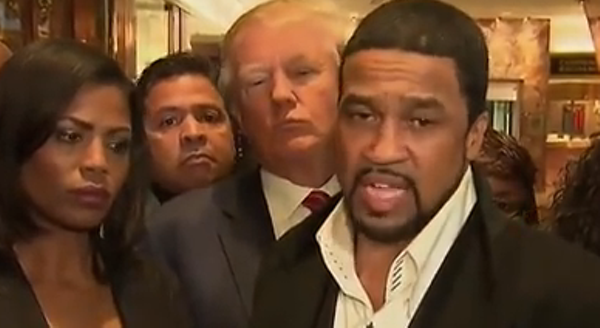 Reporter:   “So there are no gang leaders offering to reduce the body count in exchange for federal funds?”

These individuals will lie to fit their agenda and use the black community as a tool to garner favor from Trump. They parade themselves around as mascots to white supremacist Trump supporters, thinking that won’t be thrown under the bus at any waking moment. It’s a sad state of affairs in a Trump America.