…and now they have to sit there and sup on Lucy’s monkey poop and drink Kool-Aid with this bastardized illegal racist Monster that they created with their own thoughts, beliefs, and behaviors…

I mean, for Black folks, this isn’t our first rodeo with a bona fide thug misogynistic pussy-grabbing criminal white-skinned racist running the nation, there were only at LEAST 38 others before Trump — but one thing is certain about him, at least he isn’t throwing a brick and hiding his hands. He’s all out there in the open with it like a pretending ass rich Bull in a China Shop, telling the truth about them and what they are and have always been and always will be, and throwing their white sanctimonious asses under several buses whilst he’s at it.

Trump and his pretend intelligence shows how smart they really were NOT all of these centuries, his lying riches shows they don’t have a dime to to their names without faking it and using poorer Black people to underwrite it, and it shows that everything that they claimed this country stood for -even with all of its fake military might- is a bunch of illicit bullshit that the world finally sees for what it is. Period.

They raised this Hitler mentality in him, backed it up, and now they have to fight like hell for their legitimacy to be reformed and re-established without schlumping Trump’s name all over the place as he co-signs EVERY SINGLE ONE OF THE LIES they’ve told and all of the dastardly deeds about themselves for nearly 400 years.

It’s all out in the open now, so the only question left now is, do they win?

Trump is, as President Obama said, not the originator, but a symptom of the hatred, AND I ADD … of the mental illnesses of white men who, for years, have believed they owned the world and everything in it and on it, and as it turns out … they don’t. They never really have and never will.

Everything they do is a racist bigoted ruse, all the way from banks and credit reports and educational institutions to their churches and their “owned” businesses, which are nothing more than places built on the backs of slave’s labor, slaves who were never compensated for all of their hard work.

Let’s just rock’n’roll with this one … tell the truth, put on the WHOLE ARMOR, and slap the devil straight to shame.

White Men Built This Yankee-Doodle Bullshit and Now Want Everyone Else to Pay for It. They create these bills and then hand the tab over to others. Entitled to free labor and other stuff in and on the Earth that God didn’t grant to them from the start, even the WATER and the AIR that we breathe.

The white papers, the white nationalist anthems in a country made only by the hands of God, that flack piece of inherent crapper paper called a Constitution that is more than 200 years old and waaayy outdated, those red white and blue flags, etc, etc, that they want others to respect when they obviously don’t respect any of it their damned selves.

STOP LYING ABOUT THE WORD OF GOD, FRANKLIN GRAHAMS OF THE FAKE WHITE “Jesus” WORLD

Yeah, the Bible says we are to love our enemies, but you’re not OUR enemies, you are your own WORST enemies at this time in history … and you did it to yourselves.

Not nary a TERRORIST has to lay a finger on you — all they have to do now is sit back and enjoy the self-destruction, spearheaded by a race-mongering sacrilegious lout of your own making in Washington, D.C. 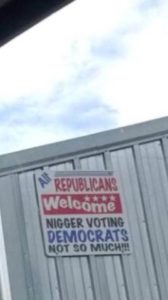 Yes, this is YOUR fault and the fault of racist liberals, as well.

Yeah the Bible says we are not to speak evil against dignitaries. But it don’t say a word about not speaking out against EVIL dignitaries. Jezebel herself, scripturally-speaking, was thrown to the dogs for being a corrupt woman who influenced an evil governor by the name of Hamas. Hamas was there to lead the people but instead became greedy and selfish, and he decided to kill his own people just to have his way and access to their belongings.
___
The Bible itself shows that the world was built BEGINNING in the far East, with what is now called “Middle East” (i.e., Northern Africa – Mesopotamia and Persia) with a bunch of Black and colored folks as its centerpiece, and the unfortunate news is that a lot of this crap, more then a little bit of it, Black folks brought on themselves.
___
Yet, it still gives white-skinned people who CLAIM to know God NO excuse for behaving as they do now with God’s original creation, even HE said punishment would come for that — for we are not YOUR business, but HIS to deal with. “Those who bless Judah will be blessed, and those who curse Judah shall be cursed.” – Genesis 49:8
___
Black folks are getting a boatload of their own punishment, and God ain’t asked for and don’t need YOUR help with that.

Yeah, God is not the God of the United States of America, white evangelicals, but of the whole world…starting with Black people, in that order. He is no respecter of persons, but there is a Judaical lineage and inheritance that takes priority in this life, and it wasn’t Black people who popped up from seemingly “out of nowhere,” it was YOU.

***
YOUR WHITE MALE ANCESTORS- built this nation to “last” based on some principles and head games that were once racially-strong and idealistic. But now, because of your own internalized self-hatred of other races and ethnicities -people also created by God- you white men turned yourselves into thugs and then tried to pin your sins and crimes on others and only Hosea The Prophet can tell you what you really are. 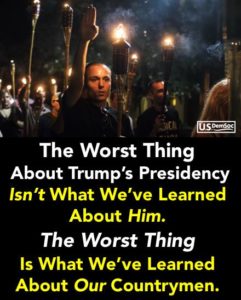 A Black man got elected President and they lost their effing minds.

It’s gotten so bad that you white males send in whites to attack other whites -cameras and videos rolling- and scream out things like “Antifa!” when alleged antifa is looking at you like you’re slap nuts. Your Klanswomen encourage you to go on nutcase rages, lighting up torches like you’re looking for the Hunchback of Notre Dame and Frankenstein’s Monster, and we cannot figure out for the life of us how you managed to degrade yourselves into such a low mental state to attack YOUR OWN PEOPLE just to make OTHER PEOPLE LOOK LIKE THEY GIVE A DAMNED about you or your hatred of them.

___
Got us in here fighting like pitbulls for some shit YOU won’t even stand up for! GTFOH!

Sanctuary!, our Black Asses. For what? WE don’t need it. We didn’t start this mess, YOU all did.

THE MONSTERS ARE DUE ON MAPLE STREET

You carry threats and torches and send out death threats like God died and left you in His place, flying off-center like you’re in some mighty whitey televised movie land theater or pinching off an episode of the Twilight Zone on a 24/7 basis.

Yet, you wake up day and night and look out of your windows and into your back yards and realize that NOBODY’S TERRORIZING OR CHASING YOU BUT YOUR OWN DAMNED SELF-BUILT SHADOWS. You made such a mess of this nation, White Man, that you’re scaring your damned selves, and now we’re all just sitting back watching the show while you try to fix what you broke for your own damned good.

The hell with what matters to us, your own guilt is driving you into delusion and you keep trying to gaslight others into thinking they are the problem when it’s YOU. Your friend, Rod Serling, even told you that you’re driving yourselves insane with your own prejudices and he was damned right about it.

YOU MADE YOUR OWN WHITE-SKINNED FOREFATHERS A LAUGHING STOCK WORLDWIDE

We didn’t tell on you, you told on yourselves.

Now you thrash about with Donald Trump spitting on the laws and constitutions of your own foredaddies, treading on your own crud and then acting like your racism against Barack Obama had something to do with your mad cow disease.

Barack Obama didn’t have a damned thing to do with this, but YOU did. Your racism is your own idol, not ours.

The rest of America could give a damned less what Trump thinks or how he feels abut anything, but there YOU are dragging your knuckles either vehemently supporting him in the destruction of your own country with your superior ideas that have no credibility or credence to them whatsoever, or trying to burn him at the stake because you are embarrassed and rightly ashamed of it. You should be.

But HE IS YOU, white man. He is and he represents what you have done to your own country: ATROCIOUSLY FAILED IT on all counts, in all colors, in all races, in ALL ethnicities, both male and female alike.

EITHER IT IS OR IT AIN’T

All things considered, white America, you should be proud of yourselves and what you’ve created in your own Frankenstein, Trump. He is, after all, the epitome of what you have tried to hide from the world for nearly four centuries.

Black and colored America has held on for too long, waiting for you all to get it together and do right by ALL of our ancestors who built this nation, and obviously, by estimation of Trump’s hardcore constituency, you simply can’t do it.

Then understand your role in helping to take down institutionalized historic histrionic white supremacy.

That means understanding what WE live with every day, and not what YOU see or how you see it. Deal with what it is, not what you think about it.

Understand that some or likely most of your white ancestors are also our blood relatives, by hook or by crook, and deal with that piece of it, the piece you have been in denial about for far too long.

For white men are also the original “baby daddies” of this nation, with Black children and descendants who have lost their white inheritance because of YOUR people, not ours.