The Original Statue of Liberty presented to the U.S. was a Statue of a…”Black Woman”.

Did you know the Original Statue of Liberty presented to the U.S. was a Statue of a…”Black Woman”. There is a lot of history that didn’t make it into the history books for our schools. READ, get you a book and educate yourself. 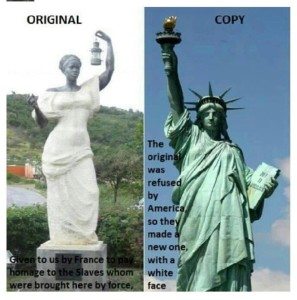 A History Lesson
It is hard to believe that after my many years of schooling secondary and post) the following facts about the Statue of Liberty was never taught. Hundreds of thousands if not millions of people including myself have visited the Statue of Liberty over the years but yet I’m unable to find one person who knows the true history behind the Statue- amazing. Yes,amazing that so much important Black history (such as this) is hidden from us (Black and White). What makes this even worse is the fact that the current twist on history perpetuates and promotes white supremacy at the expense of Black Pride.

UPDATE: Since this article was published it came to light that it as in all likelihood not true (please update us if you have any info that says otherwise)…. HOWEVER, there is more to this story. The original design for the statue WAS of a Southern Egyptian peasant woman, possibly a black muslim woman… Learn more and see images here.

During my visit to France I saw the original Statue of Liberty. However there was a difference, the statue in France is Black. The Statue of Liberty was originally a Black woman, but, as memory serves, it was because the model was Black.

In a book called “The Journey of The Songhai People“, according to Dr. Jim Haskins, a member of the National Education Advisory Committee of the Liberty-Ellis Island Committee,professor of English at the University of Florida, and prolific Black author, points out that what stimulated the original idea for that 151 foot statue in the harbor.

He says that what stimulated the idea for the creation of the statue initially was the part that Black soldiers played in the ending of Black African Bondage in the United States. It was created in the mind of the French historian Edourd de Laboulaye, chairman of the French Anti-Slavery Society, who, together with sculptor Frederic Auguste Bartholdi,proposed to the French government that the people of France present to the people of the United States through the American Abolitionist Society, the gift of a Statue of Liberty in recognition of the fact that Black soldiers won the Civil War in the United States.

It was widely known then that it was Black soldiers who played the pivotal role in winning the war, and this gift would be a tribute to their prowess. Suzanne Nakasian, director of the Statue of Liberty, Ellis Island Foundations’ National Ethnic Campaign said that the Black Americans’ direct connection to Lady Liberty is unknown to the majority of Americans,BLACK or WHITE.

When the statue was presented to the U.S. Minister to France in 1884, it is said that he remonstrated that the dominant view of the broken hackles would be offensive to a U.S. South, because since the statue was a reminder of Blacks winning their freedom. It was a reminder to a beaten South of the ones who caused their defeat, their despised former captives.

1.) You may go and see the original model of the Statue of Liberty, with the broken chains at her feet and in her left hand. Go to the Museum of the City of NY, Fifth Avenue and 103rd Street write to Peter Simmons and he can send you some documentation.

3.) The dark original face of the Statue of Liberty can be seen in the N.Y. Post, June 17, 1986, also the Post stated the reason for the broken chains at her feet.

4.) Finally, you may check with the French Mission or the French Embassy at the U.N. or in Washington, D.C. and ask for some original French material on the Statue of Liberty, including the Bartholdi original model.
— with Edwin Cobb, Gemini Hodge and Deverick Murray.