The Olmecs: Proof Black People Were In The Americas LONG Before Columbus and Slavery

The Olmecs are the first known civilization of Mesoamerica, which includes present-day Mexico, northern Costa Rica, El Salvador, Honduras, Nicaragua, Belize, and Guatemala. They prospered in the Pre-Classical period, which was from c. 1200 B.C.E – 400 B.C.E. This means, the Olmecs established civilizations before the Aztecs and Mayas. In fact, the Olmec culture influenced several cultures that came after them. Today, the Olmecs are mostly known for their colossal heads, which are stone sculptures that represent the heads of humans or gods.

The Olmecs’ diet consisted of crops which they grew by burning their overgrown plots for planting. They would use the ashes as fertilizer for the various crops they grew, such as manioc, sweet potatoes, squash, beans, and tomatoes. Later in their existence, maize became the staple crop. In fact, this crop became so important that they associated maize with one of their gods. The Olmecs also made sure to establish civilizations near rivers and lakes so they could have fish, alligators, clams, and other seafood in their diet. 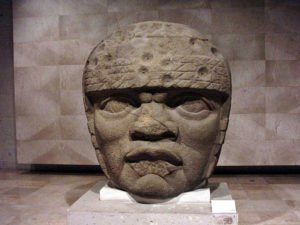 While there isn’t any written evidence of Olmec life, there is archeological evidence that has helped researches learn about their daily life, such as the colossal heads, along with paintings and rock carvings. One feature of their daily life was traded. Researchers have found evidence of trade throughout Mesoamerica. The Olmecs traded several goods and established a number of trade routes. Because of all their trading, the Olmecs were able to establish a large number of villages and urban communities.

One of their first urban centers was called San Lorenzo, which reached its height around 1200 B.C.E. – 900 B.C.E due to trade. Because San Lorenzo’s location was at one of the safest places from flooding, the Olmecs could control their trade better from this city. Along with goods, the Olmecs traded their artwork, such as pottery, jade, serpentine, mica, obsidian, and rubber. Researchers know about San Lorenzo’s existence because of the mount structures that still exist to this day.

San Lorenzo started to see its last days when another popular city started to flourish. This city, known as La Venta became the new capital. Researchers believe that La Venta’s population reached about 18,000 at its height. Like San Lorenzo and another city, known as Laguna de Los Cerros, La Venta had bilateral symmetry. La Venta is home to Mesoamerica’s first pyramid. La Venta also housed at least four colossal heads which seemed to be the city’s main points as they faced outward.

Through the archeological evidence, research can piece together that the Olmecs created a one with nature, which became part of their religious beliefs. The Olmecs associated their gods with nature, such as rain. Many researchers believe that the Olmecs gave the animals in the culture a special significance, especially the ones which are higher up in the food chain, such as sharks, jaguars, eagles, and snakes. They furthered advanced their art and beliefs by linking animals together, with gods, or with themselves, for example, a cross between a jaguar and a human, known as a were-jaguar.