Noam Chomsky: Reagan was an Extreme Racist who Set Back Race Relations in America By More than 100 Years 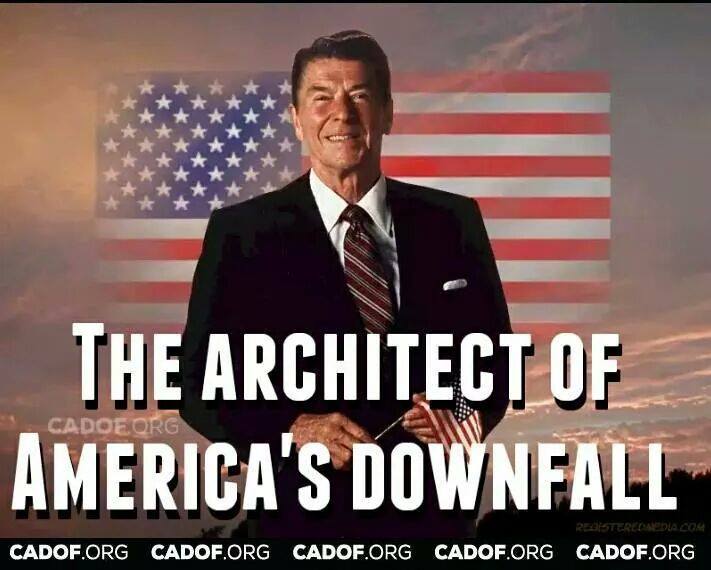 Raw Story posted an article on Noam Chomsky’s reflections about what is happening in America with regard to the direct outright abuse and murders of young Black men across America and the role that Ronald Reagan played in today’s America, and it’s Tea Party Republican faction.

He hit the nail dead on the head about the root of this current mess, and left a vibrating ringtone echoing behind it.

Quote: “This is a very racist society,” Chomsky said, “it’s pretty shocking. What’s happened to African-Americans in the last 30 years is similar to what [Douglas Blackmon in Slavery by Another Name: The Re-Enslavement of Black Americans from the Civil War to World War II] describes happening in the late 19th Century.” Blackmon’s book describes what he calls the “Age of Neoslavery,” in which newly freed slaves found themselves entangled in a legal system built upon involuntary servitude — which included the selling of black men convicted of crimes like vagrancy and changing employers without receiving permission.”

Ronald Wilson Reagan (aka “President 666”) wasn’t really all that famous an actor, he was a mediocre actor who was just well-known in his own specialized circles. They blew his head up bigger than it should have been, particularly since his Hollywood-clouded “patriotism” was well over-shadowed by one Marion Robert Morrison, otherwise known as “John [The Duke] Wayne.” Both actors, as Rod Serling once put it, only fought American wars in the back prop lots of Warner Brothers recording studios.

He didn’t make it in the acting business by any degree worth mentioning, then he turns around and gets all Hollywood-blinged in his head about an America and some American patriotism that never existed anywhere except in the movies, on television, and in his big overblown head.

He then decided to ride his Hollywood ragamuffin fame into the governorship of California, which boosted him to become President, for some reason no one has figured out to this day.

If the Tea Party should have been looking for someone to hang, it should have been that piece of Hollywood-induced garbage who erroneously invoked a Bible passage (re, ‘plowshares into pruninghooks’) that wasn’t speaking about him or his people to get himself elected President of a country that should have been long over his kind of racism by then, but wasn’t.

His occupancy in the White House for eight years during the 1980s set American progress for Black people back to the 1900s, and we have never recovered from it.

Reagan’s racism is so obvious and overt in President Obama’s historical legacy that this country is now more effectively racist than it was in the 1860s. President Obama would never have seen this shameful day had Reagan’s people not set the tone and pace for it, and had many many Black people not effectively co-signed it into existence by doing and saying nothing when it was going on.

They called Reagan “The Great Communicator,” because he was full of Hollywood bullshyt when he took office, and he died full of Hollywood bullshyt some years later. He died very mistaken about the actual legacy he left behind, one of a broken nation left in shambles because he acquiesced to a broadband kind of racial disorder in order to make himself who he was. And he died as he lived … a mess of a confused man, in just as much anguish and pain as The Great Instigator –Lee “Boogie Man” Atwater– who inspired and handled Reagan (and George H.W. Bush the Former) to do what they did.

This country was destroyed under Reagan’s presidency, and America could have been a great country by now, but it was estopped not only after losing WWII, but during the advent of one of the most racist Presidents this nation has ever known, besides damned near all the others who came before him and that was with very few exceptions.

Reagan’s legacy as one of the most racist presidents in a time in history when it was not necessary for him to be so, is what underwrites the great all-American Tea Party and its Republican constituents, note for note.